Unless you’re seeking out European baby formula or have heard about its benefits from friends or family, then you might not know how beneficial it can be for your baby or that it even exists. There are actually several good European Baby formulas worth trying.

This mostly depends on your baby’s needs, and each one offers top quality. That’s not to say that other formulas aren’t also exceptional, but there are some big benefits of European baby formula that you just can’t ignore.

European formulas are, for the most part, organic formula milk, which is a huge plus for parents who prefer all organic everything. As a whole, European formulas have stricter regulations on what actually goes into them.

This is where superb organic ingredients come in. And for the most part, the cows the milk come from are raised on farms that follow principles of Biodynamic Agriculture (or Demeter farm certification). In other words, the cows graze on fields (grass-fed cows) which haven’t been contaminated with chemicals.

While other cows with milk used for other cow milk formula may still be harmless for your child, using European milk can give you peace of mind.

Formulas made with European ingredients also usually have probiotics, which are important for your little one’s digestive system. Not only that, but probiotics also often help with any bacteria in the intestines, so it’s a win-win all around.

And, unlike formulas developed in the U.S., European formulas tend to have a lot less sugar (especially added sugar and processed sugar) and typically whey processed without hexane.

Sometimes, U.S. formulas have brown rice syrup added, and as that’s not great when consuming frequent doses, European formula comes out on top once again. And these are some of the best European Baby formula options worth trying.

The Best Baby Formula from Europe at a Glance

The Holle Stage 1 Organic Formula is easily one of the more popular European baby formulas out there and certainly at the top of the scope.

This leading German baby formula is made with goat milk protein. It is suitable to use from birth and on alone or in addition to human breast milk from breastfeeding. You can use it in a bottle or mixed with baby cereal if needed. Just as you’d do with cow milk-based formula.

The taste and consistency also make the formula feeding easy to transition to if your baby is switching from a standard cow’s milk formula.

So there’s not much, if any, confusion. It’s made with an organically grown ingredient, as the name would suggest. There are no artificial colors, flavors, or additives.

This particular formula also has expiration dates which are further into the future than other similar formulas. This means that you can stock up on a lot of boxes at a time without worry that one will spoil before you get to it.

Our Pick
Where to Buy HiPP?

Our preferred vendor for buying HiPP online in bulk is definitely MyOrganicCompany.store. They have generously offered our readers 5% off with code THEBABYSWAG at checkout!

Check Prices & Deals
We earn a commission if you click this link and make a purchase at no additional cost to you.

Unlike some other European baby formulas, the HiPP Stage 1 Combiotic First Infant Milk Formula is made with cow’s milk protein.

So while it’s not vegetarian friendly or suitable for babies with a milk intolerance or allergy (hypoallergenic formula), it can still provide your baby with the nutrients they need for that first year (without any synthetic nutrients). It’s made from organic skimmed milk and has Vitamin A, D, and B2, among others.

HiPP Organic baby formula essentially has all of the nutrients necessary for your baby’s mental and physical growth, including Omega 3 (fatty acid), DHA, and AA. It’s unclear if this particular European formula will help with digestive issues (like constipation or gas).

However, HiPP formula products are made to be gentle on the stomach (ideal for sensitive stomachs). And it has everything your baby needs, whether they take it in place of breast milk or in addition to it.

Our Pick
Where to Buy NannyCare Formula | Organic Baby Shop

It's REALLY hard to find a reliable supply online. Fortunately, OrganicBabyShop DOES have it in stock. They also generously have offered readers a 5% off discount with code BABYSWAG5 at checkout!

Save 5% Off
We earn a commission if you click this link and make a purchase at no additional cost to you.

Babies with a sensitivity to cow’s milk will likely react well to the Nannycare Nanny Goat Milk Growing Up Formula.

The goat’s milk formula isn’t made for those who have confirmed milk allergies. However, one can use it as a formula that’s easier on the stomach and digestive system because the formula is made with goat’s milk instead of cow and contains the right nutrients and minerals for growing formula-fed babies.

The protein in the goat milk formula makes for smaller curds which are easily digestible and won’t contribute to colic or gas issues in little ones. The goat’s milk whey comes from are from New Zealand. They raise the goats there without stimulants and hormones, which can make resulting formula less than pure for babies and toddlers drinking it. It does have Vitamins A and C for a healthy immune system and Iron, calcium, and Vitamin D.

As another healthy European formula, Lebenswert Bio Organic Formula is made without maltodextrin, which is a food additive and that alone may help parents feel at ease giving it to their babies.

You can use it instead of breast milk or in addition to it and it’s so gentle that it’s fairly easy to switch to the formula when moving over from breast milk exclusively or another milk powder formula (powdered formula).

In addition to containing all of the vitamins and minerals necessary for your baby’s development. The formula’s milk comes from farms that meet and exceed the guidelines of the Bioland Association. This is especially important for organic formulas. The formula also somehow smells better than a lot of American formulas. And since sometimes the smell and taste can be a little disconcerting, this is another huge bonus. 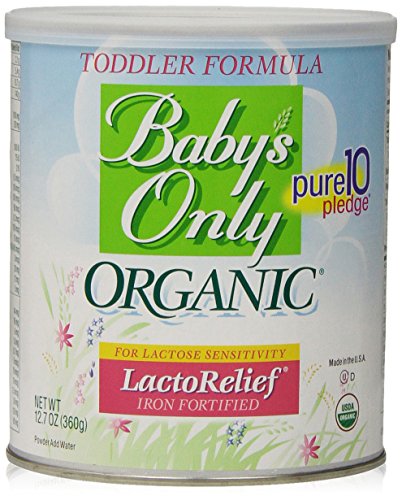 Rated "Best In Class" for Purity and Nutritional Superiority by CleanLabelProject.org after testing over 500 different baby formulas and baby foods.

Like some of the other options on this list, the Baby’s Only Organic Non-GMO LactoRelief Formula is another one that’s a top brand known overseas and as in the U.S (American formula). It’s made with organic milk (from organic farming). Its design allows it to be easy on the stomach, especially for little ones with lactose sensitivities.

This means Baby’s Only organic baby products should be used for children who are intolerant of lactose, as it does offer an alternative for babies and young toddlers who need relief from gas and digestive issues related to lactose formula (note that it’s still a cow’s milk product, just engineered for digestion).

The organic baby formula contains DHA & ARA fatty acids for your baby’s healthy development and it contains no corn syrup or palm oil, which are sometimes key ingredients in other formulas.

There are a few other organic baby formula brands worth checking out as well (some of which we have written on, others not so much):

Here are some common questions we get, specifically about European, Organic, and Non GMO formula:

No. As this is a European product, Holle is not FDA approved. It’s also not FDA dis-approved. EU standards tend to be much stricter than US standards for organic baby food, however. UPDATE: The FDA has now approved Holle formula for Stage 3 and above (although Stage 1-2 still exists in the grey area).

Is baby formula regulated by the FDA?

No. Surprinsingly, formula is treated similar to health supplements and are not given “approval”. However, they do have to follow FDA marketing guidelines and meet minimum nutrient requirements.

Can you import formula?

Yes, there are currently no restrictions on importing baby fromula from Europe. There ARE labeling guidelines that all brands must adhere to, even if a product is not strictly FDA approved.

Is there a good soy-based infant formula from Europe?

I have not been able to find a good soy based organic baby formula from Europe, but please let me know in the comments if you have a good recommendation. Typically, I try to avoid US-based soy formula products as they are usually GMO (genetically modified) and mass produced.

Child’s Health Disclaimer: We are parents, not qualified medical professionals. As with anything, please check with your Pediatrician if you have any questions or concerns. Ultimaltely, only a Pediatrician is qualified to answer specific questions.

Final Thoughts on the Best Baby Formula Brands from Europe

Most parents tend to love that a lot of European formulas are organic, which is something they look for with U.S. formulas as well. This doesn’t come as a surprise. They’re more than likely free from sugars and, in some cases, free of oils that parents prefer all formulas to be without. And all the while, European formulas still contain a lot of the same nutrients and infant nutrition benefits.

A lot of American formulas don’t have probiotics added, like European formulas tend to have. Probiotics help improve digestive health and promote a healthy digestive system in babies and toddlers.