When comparing different baby formulas and baby food, one major factor that goes into deciding on which one to purchase is often the brand.

In this case, however, when comparing the Hipp vs Holle Formulas, that doesn’t work since they’re both from the same baby food brand.

As to be expected, though, some differences make each formula it’s own and which might make it easier for parents to pick one for their baby.

Both options are considered to be suitable replacements for breastmilk or used simply in addition to breastmilk.

They’re both also organic formulas, which is also a significant factor for some parents. But you have to expect that they also have some stark differences since they are, after all, two different formula options, even if they do come from the same company.

The Hipp, for example, is considerably less expensive than the Holle Formula option, and since the cost is a huge variable that goes into deciding which formula to choose, that could make the decision for some parents right there.

Then again, the Hipp also has high levels of aluminum in its ingredients, which parents might find a bit concerning.

But Hipp also includes a lactose sweetener in place of sugar, while Holle includes maltodextrin, a natural plant-based sweetener (vs vegetable oil or coconut oil), in its European formula. While both formulas are organic, though, Holle formula comes from a farm that is also biodynamic, which is like a step up above simply organic and adds to the nutritional value you’ll find in the Holle formula overall.

Both options are relatively close to each other, so you may be hard-pressed to find obvious differences, but at the end of the day, Hipp vs Holle is going to turn up with a winner of sorts.

Bottom Line Up Front Summary: Personally, I think both of these European fomula picks are MUCH better options than conventional formula, but – mainly for the higher quality ingredients – I prefer going with Holle here (use code BABYSWAG5 to save 5%)

Main Differences Between Hipp vs Holle

The main differences between Hipp vs Holle are: 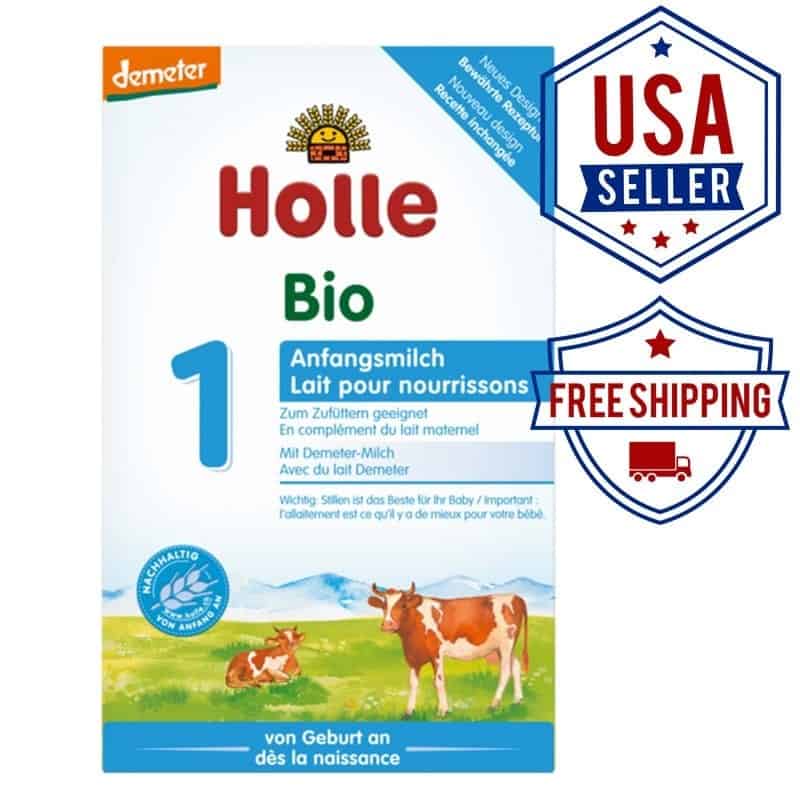 Like Holle, the Hipp Organic Combiotic First Infant Milk Formula is originally from the United Kingdom, so U.S. users will have to purchase containers online. However just because the formula is primarily available online, it doesn’t mean that it’s any less healthy for your baby, especially in the long term.

It’s suitable for babies from birth, and onward, so you can introduce it right away, whether you want to give your baby breastmilk as well or not. It also contains Omega-3 and Omega-6, among many other nutrients necessary for your little one’s overall growth and development in the first year.

The formula first ingredient of the formula is organic skim milk protein, so it’s a legitimate dairy product and comes from cows that have been humanely treated and fed cows. Because of its organic ingredients, Hipp may also be better on your baby’s tummy than some other similar U.S. brands, which is saying something.

Nutrition Facts: The formula contains Omega-3 and Omega-6 for your baby’s overall health and development, as well as Praebiotik, which includes lactose, and Vitamins A, B6, C, D, E, and K, among many others.

HiPP Age Range: It’s suitable for babies from birth and up.

Price: An 800 mg. container of Hipp Formula is about $16-25 depending on where you buy / seasonal deals.

Where To Buy HiPP: Hipp isn’t always available in stores and not readily carried by major online retailers. BUT I have found 3 reliable stores (below). Generally, I price compare each, as they are all close in price by can be slightly lower depending on deals and promos:

“The best baby milk I’ve ever tried! I would recommend all mums to use this baby milk because it has two sealed bags inside and you don’t need to rush to finish a bag until it expires, this the only baby milk in the U.K. with friendly bacteria and this sorted my little one’s bowels perfectly, and it’s organic!” – Dovile Garaleviciene on Amazon.

“I researched many formula options when choosing to add a bit into our son’s diet. Of all the options out there not only did he prefer Hipp the best, I was relieved as it’s organic properties had been such a strong positive to me as well. Unlike some other brands that look grey or brownish in color, Hipp looks and, to my son, tastes like milk. He had no problem going back and forth between my breast milk and Hipp, and I occasionally did 50/50 bottles that he equally gulped down.” – Amanda Cole on Amazon.

“I prefer organic milk products as they contain a lower amount of hormones so this was the obvious choice. My son takes it so he must like it and doesn’t seem to have many digestion issues. A great addition to breastmilk.” – Sascha on Amazon.

The Holle Organic Infant Milk Formula should be bought in the different stages it offers, but it’s still a pretty solid formula all around, even if you’re supposed to adhere to those guidelines.

It’s an organic baby formula made with Demeter biodynamic cow’s milk, which essentially means that it’s a step above your average run-of-the-mill organic baby formula. This does put it above the rest, even Hipp in some ways. Plus, it has no artificial flavors or colors and made with no genetically modified ingredients.

Not only that, but there’s also plenty of care taken with the cows the milk-based formula basically comes from. The animals are treated appropriately on farms, with no painful dehorning involved.

You can use it as your baby’s formula as soon as they’re born or use it as an appropriate stepping stone when you want to wean him or her off breastmilk for good. You can also use it to mix in different baby cereals, which only adds to the nutritional value you’d find in such meals for your baby.

Age Range: This particular formula is made for babies from birth up to six months old. At that time, you can switch to another one.

Sizes Available: It comes in a 400 mg. container or a pack of six.

Where To Buy: It’s actually relatively difficult to find online or in stores, BUT I’ve found a few reliable online retailers. Generally, I check each of the ones below of the best prices and promotions:

“Probably the best-powdered milk available anywhere. Probably the most expensive, but then what price do you put on health? All organic, and biodynamic — milk from alpine cows in southern Germany. It couldn’t be any better. And our baby loves it.” – Tuco Ramirez on Amazon.

“Holle formula is really easy to make, mixes quickly, and there are clear directions on the box. I’m unsure if it’s more expensive than shop bought organic formula as our local supermarket doesn’t stock formula that doesn’t have the added Omega-3 ingredient. To be honest, I don’t care about the price as long as my baby is happy and healthy. Delivery was efficient and quick to arrive — I ordered this over the Christmas period, and it arrived the next day after dispatch. Highly recommended and good to know it’s a natural product. Wish I’d discovered it sooner.”  – Angela C. on Amazon.

“Rest assured parents this is the best alternative to breast milk that is on the market. My son is 8 mos. old and we have supplemented with Holle 1 and 2 since he was two weeks old… My son’s digestion of this has been akin to breast milk. No upset stomach, no excessive spit up, gas, super stinky poo, etc.” – Jackie R. on Amazon.

“Amazing! I could even drink it myself! Tastes good, smells good, and my baby digests it very well. I strongly advise it to any mom who sadly cannot breastfeed more than three months.” – Virginie on Amazon.

The Verdict: Holle or Hipp Formula?

In some ways, the Hipp and Holle formulas are nearly indistinguishable as European baby formula. But upon a further look into both formula options, you’ll see that they each have their unique qualities that set them apart from one another.

When it comes down to it, though, the Holle Organic Formula is the stronger contender here. It may be a little pricier, but because of its exceptional and high caliber organic and biodynamic farming you can have confidence in the quality of ingredients.

Hipp also has a few different oils added in the ingredients that the Holle does not, which is another strike against Hipp, even if it is a solid formula on its own. However, when comparing the two, Holle takes the cake.

FAQ’s About Hipp and Holle

Which Hipp formula is closest to breast milk?

It’s perfectly normal for you to want the best milk possible for your little one, so the best option to choose in the beginning is Hipp Stage 1 which is made with simple ingredients and no additives.

Can I mix Hipp with other formulas for my baby?

You can mix 2 different formulas as long as they have the same nutritional value and you follow the recommended amounts. Also, you have to check how your baby reacts to them, so you know in case one causes trouble to their tummy.

What is the difference between Hole Pre and Holle Stage 1?

In Hole Pre, there is lactose as sweetener, whereas in Holle Stage 1 there is maltodextrin as a sweetener which some babies process it easier. In this way, lactose intolerant babies can have this as a feeding option.

Yes and no. The goat formula is better simply because it does not cause constipation and it is lighter on the baby’s stomach. However, the cow’s milk has more iron in it and is recommended for babies until 12 months. You can, of course, give goat formula to your little one, but include iron in their daily intake.

Whether you choose not to breastfeed, have no other choice but to formula feed, or wish to do a combination of both, you’re going to need to find the right formula for your baby.

With some little ones, it’s more of a trial and error sort of thing and can become cumbersome and frustrating to find just the right one that will nourish and fill your baby.

In this instance, the big question was choosing between the Hipp vs Holle options because who doesn’t love organic when it comes to their baby? But once you can narrow it down and zero in on what’s best for your child, that’s half the battle.

Bottom Line Summary: Personally, I think both of these European fomula picks are MUCH better options than conventional formula, but – mainly for the higher quality ingredients – I prefer going with Holle here (use code BABYSWAG5 to save 10%)