Most babies are prone to gas. There’s no getting around it, and even if your baby is totally calm one day, that could all change so quickly, since babies are unpredictable by nature. Thanks to Earth’s Best Sensitive Formula Review, though, you can give your baby certified organic formula with iron while treating any gas or fussiness they may have or soon develop.

Since some parents are wary about formula, even organic varieties, Earth’s Best Sensitive Formula is made with both DHA and ARA, which are fatty acids found in breast milk that help in the brain and eye health, so the important nutrients are definitely there.

It also has Lutein for eyesight development and prebiotic fiber for your baby’s immunity, while containing 95% less lactose than some other formulas.

Earth’s Best is already a trusted USDA-certified organic brand that some parents live by, so naturally, their Earth’s Best Sensitive Formula is designed to uphold their reputation and give your infant the right kind of nourishment daily. 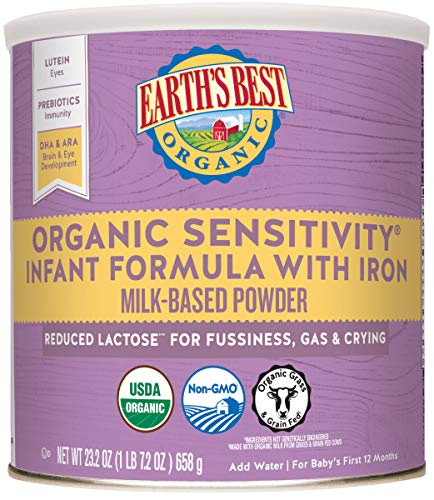 Earth's Best Organic Formula Check Price
We earn a commission if you click this link and make a purchase at no additional cost to you.

A baby formula that’s non-GMO essentially means that the formula is without any genetically modified ingredients and with Enfamil Non-GMO Gentlease Formula, that’s what you’ll get. In fact, its biggest strength, of course, lays in its nutritional ingredients.

The formula contains inositol, which helps brain development, as well as and DHA which is found in breast milk. Not only that, but Enfamil Non-GMO Gentlease Formula also has what the brand calls a Unique Triple Health Guard blend, which has 30 different nutrients and vitamins for your baby’s growth and development.

Like Earth’s Best, Enfamil also understands the need to help ease fussiness and gas in babies, and their Non-GMO Gentlease Formula is designed to help reduce gas and fussiness within 24 hours of your baby drinking it for the first time.

Claiming to be closer to breast milk than many other leading brands, it could also be a good transition formula for a breastfed baby. 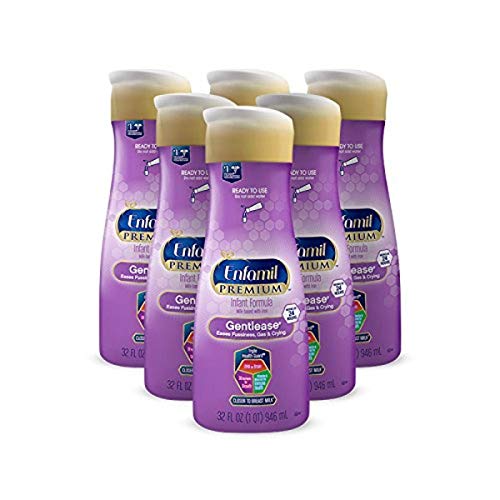 Enfamil PREMIUM Non-GMO Formula
$9.49
Check Price
We earn a commission if you click this link and make a purchase at no additional cost to you.

Finding an organic formula isn’t the hardest task for a parent, but finding one that contains all of the necessary nutrients, as well as protection against fussiness and gas, is certainly a plus. With Similac Organic Infant Formula With Iron, you get an organic formula for your infant up to 12 months of age and it’s made with real organic milk.

It also has Similac’s OptiGRO mixture of essential nutrients for growing infants, like DHA, Vitamin E, Lutein, and prebiotics to aid in healthy digestion.

As a USDA-certified organic formula, Similac Organic Infant Formula With Iron can be used to give your baby nutrition for the first year of his or her life, while providing them with wholesome ingredients that aid in their physical and mental development. 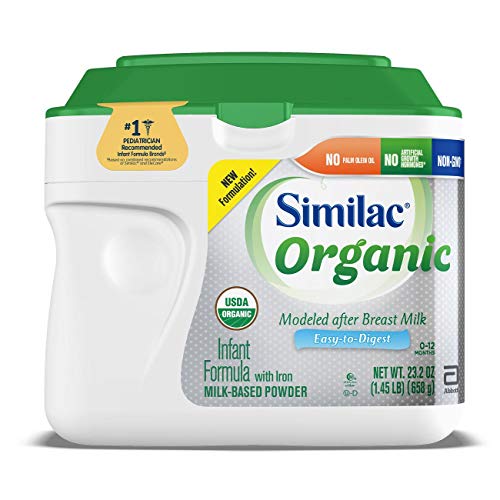 Similac Organic Infant Formula with Iron
$179.88
Buy at Amazon.com
We earn a commission if you click this link and make a purchase at no additional cost to you.

Like many other baby brands, Gerber is one almost synonymous with healthy baby food and snacks, especially when it comes to your growing toddler. So it would only make sense that the Gerber Good Start Gentle Non-GMO Formula would have everything your infant needs as they grow each day.

As a “stage 1” Gerber food, the formula is made for infants and older babies up to 12 months old and contains all of the nutrients that breast milk would provide your baby with.

In addition to DHA for your infant’s brain and eye development, Gerber Good Start Gentle Non-GMO Formula also contains “Comfort Proteins,” which are smaller proteins for your baby’s stomach that will enable him or her to better digest foods for healthier stools.

It’s a gentler formula that the closest to breastmilk Gerber has to offer while containing the right proteins and nutrients to make it easy on your baby’s stomach. 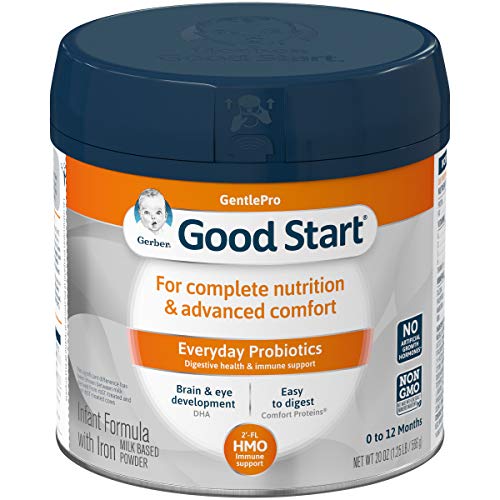 This gentle formula features a blend of DHA, prebiotics, and comfort proteins, small proteins that are easy for tiny tummies to digest It's our closest formula to breastmilk.

Vermont Organics seems dedicated to providing your baby with the most natural kind of formula, second-best only to the real thing. And the Vermont Organics Milk-Based Organic Infant Formula With Iron is definitely comparable to Earth’s Best Sensitive Formula.

To put it into perspective, the first couple of ingredients listed for the formula are organic nonfat milk and organic vegetable oils (including palm or palm olein, soy, coconut, safflower, or sunflower).

It also contains nutrients you’d find in breast milk as well that aid in your baby’s development during their first year.

Made with no genetically modified ingredients, and without any added growth hormones, Vermont Organics Milk-Based Organic Infant Formula With Iron is a USDA certified organic formula that you can feed to your baby with confidence.

For some parents, the formula isn’t really an option, as there is still a stigma surrounding it and the benefits breast milk has over formula feeding. But the truth is, formulas like Earth’s Best Sensitive Formula are made with the same kinds of nutrients that babies get from breast milk anyway and provide them with all they need as they grow into toddlers.

Buying organic always puts parents at ease as far as what’s going into their children’s bodies, and with Earth’s Best, there’s certainly the added bonus of the formula being more natural than many of its competitors.

Since the formula is also a sensitive variety, meant for babies who have gas or fussiness that can’t be calmed otherwise, even those who opt for breastfeeding are sometimes forced to go the formula route. And if you have to go back and forth between both formula and breast milk, Earth’s Best Sensitive Formula is a solid option.