I will never forget what a Godsend a white noise machine was for my newborn and how much it helped him sleep well into toddlerhood. As any parent of a light sleeping baby can agree with, having something there to give the kind of steady stream of noise can be the difference between being able to watch TV past 8 p.m. and the need to tiptoe every time you walk past your sleeping child’s room.

So yeah, finding the best white noise machine for your baby is kind of a huge deal that goes way beyond sticking a fan in their room to run all night. Granted, that might be the easy way out, but there are plenty of white noise machines for babies that are literally made for that.

Some white noise machines are either too quiet or too loud and while the former is basically useless, the latter can be damaging to your baby’s hearing in the long run. In fact, a recent study showed that having some white noise machines set at their highest settings was equivalent to the noise decibel of a hairdryer or a blender in your baby’s room.

Instead of worrying over the too high or too low sounds of a white noise machine, though, these are easily the top five white noise machines for babies that will work well for everyone in the long run. And yes, that includes you too, because if baby sleeps well, so do you. 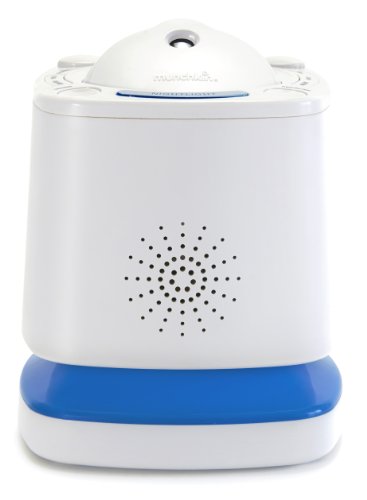 Munchkin Nursery Projector and Sound System Check Price
We earn a commission if you click this link and make a purchase at no additional cost to you.

As a white noise machine, the Munchkin Nursery Projector and Sound System also projects three different images onto the ceiling to act as a way for your baby to count sheep, so to speak, and soothe them as they try to fall asleep.

There are also multiple soundscapes for your baby to fall asleep to, whether they end up preferring the sounds of the ocean or rainforest, the Munchkin white noise machine has something to work with your baby’s preferences. Because yes, your baby, as little as he or she may be, is already developing tastes and opinions. Even if they can’t put them into words just yet.

Having different sound settings is kind of amazing, especially when you might get home and realize that your baby hates whatever one sound your chosen white noise machine makes. The Munchkin Nursery Projector and Sound System is also voice-activated and has a sleep timer on it.

Eventually, you might want to wean your baby off the reliance of a white noise machine, so having a timer on the machine helps in getting their bodies used to not having it all night once they’ve already fallen asleep. And if you find that some nights, your baby would rather jam out to some Mozart as they fall asleep, there’s that option too.

The Downside: The whole point of a white noise machine for your baby is to give them a constant soothing noise without the worry of the machine overloading or dying in the middle of the night. Unfortunately, after a few months, the Munchkin might do just that. It might be from all of the nightly use, but that’s why it’s there, so if you’re OK with replacing the machine once every few months, then you’re golden. But if not, then that’s kind of a big bummer after all of the good it could go for your baby’s sleep schedule. 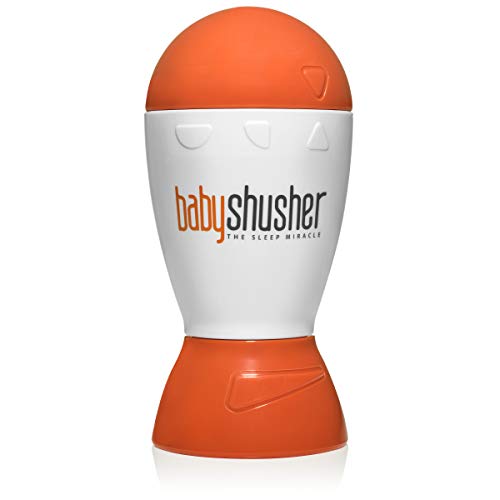 Baby Shusher the Sleep Miracle
$34.99
Check Price
We earn a commission if you click this link and make a purchase at no additional cost to you.

Any doctor will tell you that, when trying to soothe your baby, whether they are a newborn or a growing toddler, the “shushing” noise that mirrors that of the sound of the womb is what will soothe them the quickest.

And the Baby Shusher mimics that as it emits loud shushing noises that soothe your baby to sleep and even back to sleep if they wake up in the middle of the night.

Shortly after I had my baby, I remember one of the many doctors who came in and out of my hospital room recommending the book Happiest Baby on the Block, which promotes the shushing method in soothing babies and the Baby Shusher further draws on that method as it works to soothe your baby with what some believe is the most natural sound to them.

The Shusher has two different timer options, which allow for either 15 or 30 minutes of shushing time for your baby and a built-in volume controller that enables the machine to get louder as your baby does. So even though it might seem like your baby’s cries are making the Shusher unheard, that won’t be the case.

As a parent, you might find yourself doing the “shushing” method until your lips are dry and you have no saliva left in your mouth. So incorporating the Baby Shusher could help alleviate some of that.

The biggest flaw in the Baby Shusher is in its design. The speaker that actually lets out the shushing sound is actually on the bottom of the machine, so if you want to make the most out of the machine, you’ll have to lay it on its side, which isn’t really ideal. Also, the 15 and 30-minute shut-off times aren’t the smartest when you have a baby who is finally falling asleep when the thing shuts itself off. Not cool. 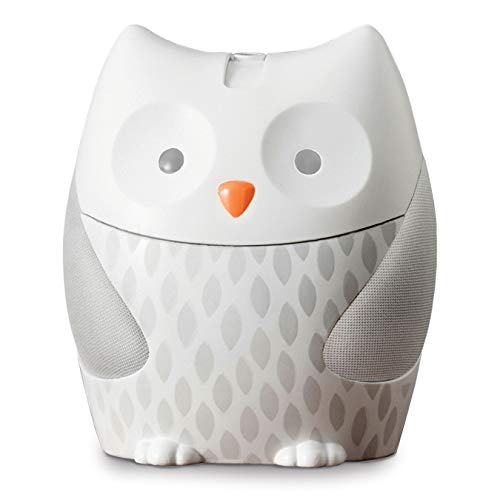 Skip Hop Baby Sound Machine: Moonlight & Melodies Nightlight Soother
$30.99
Check Price
We earn a commission if you click this link and make a purchase at no additional cost to you.

The Skip Hop Moonlight & Melodies Nightlight Soother is, above all else, a white noise machine, but it also projects stars onto the ceiling and walls to give a nightlight effect while soothing your baby to sleep.

This particular model is an owl, but the soother also comes in the form of an elephant, making it something that typically blends in well with your baby’s bedroom. You know, as opposed to some awful mechanical looking white noise machine that looks like it belongs in a doctor’s office instead.

Since the owl’s wings double as speakers, there are no detachable speakers or eyesore speakers that are barely hidden on the white noise machine. It also plays up to 60 minutes of music or sound. The sounds, by the way, include both nature sounds and melodies, so your baby definitely has some options so you can figure out what does it for them as far as the right sleep sounds go.

Believe it or not, it is possible to make the sound on a white noise machine go wrong. At least, in this case, you might be faced with a dud. Some users of the Skip Hop Moonlight & Melodies Nightlight Soother report the sound fading out within the first couple months of use, with the noise reduced to an awful crackling that literally no one could fall asleep to. 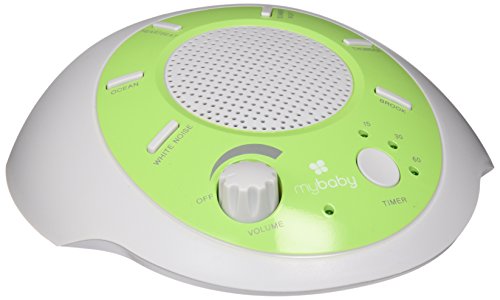 myBaby SoundSpa Portable Machine Check Price
We earn a commission if you click this link and make a purchase at no additional cost to you.

The myBaby SoundSpa Portable is a white noise machine for your baby that can either stay in their room, close to their crib or be taken with you on the go.

It features six different sounds, including a simple white noise, the ocean, and the sound of a heartbeat, which most newborns would find soothing right away. It’s also battery-operated, which can be useful if the power goes out overnight or just to avoid dealing with finding an outlet close enough to your baby’s bed.

The fact that the myBaby SoundSpa Portable is, in fact, portable takes it a step above a lot of other white noise machines for babies. When you have an infant, leaving to go on a vacation or even somewhere overnight entails that you bring lots of necessities to keep the baby entertained and happy. Basically, all the comforts of home and then some. Having a portable white noise machine for them will make the process so much easier.

Once again, one of the most unfortunate features of this particular white noise machine is the fact that there is a 60-minute limit to how long the noise can be played continuously. Personally, I believe that there shouldn’t be a limit at all, let alone one hour. I get having that option, but that’s what it should be – an option, not a mandatory feature. 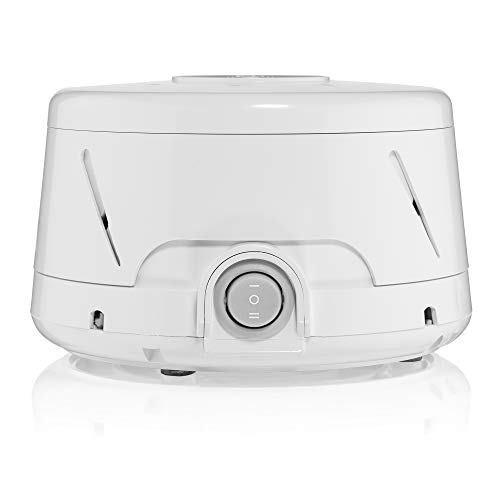 Marpac Dohm Classic The Original White Noise Machine
$44.95
Check Price
We earn a commission if you click this link and make a purchase at no additional cost to you.

At less than 3.5 inches tall, the Marpac Dohm-DS All Natural Sound Machine lets out the sound of a steady fan without a breeze coming along with it. There are also two-speed settings to the white noise machine, enabling you to choose your own speed each night, rather than be stuck with one set sound intensity.

Since the Marpac Dohm-DS All Natural Sound Machine is so small and can literally fit in your hand, you can take it anywhere. It might not be portable, so to speak, but it does have the capability to travel with you so that you and baby can utilize its sleeping help when you’re not at home. And although it’s not the prettiest white noise machine for your baby, the fact that it’s so small and neutral looking means that you can even hide it, if need be,

While it does have a couple of different speeds for the white noise sound, it doesn’t mask noises louder than a medium level outside of your baby’s room. So while you will be free of living that tip-toeing life, you will still have to be aware of the noise you make throughout the house while the baby is sleeping.

In this situation, it’s hard to settle on just one baby white noise machine, because they’re all in generally the same price range with a lot of the same features.

But you just can’t get around the annoyance of having a white noise machine that shuts off or only has a 30 or 60-minute limit to it. So the Marpac Dohm-DS All Natural Sound Machine is going to be your best bet, as it will stay on all night so soothe your baby and won’t cost you a crazy amount of money for the sleep it will provide everyone.