There’s a good chance that, no matter what brand or type of formula your baby likes one week, they’ll be reacting to it negatively the next, and so will begin the ever-pressing search for the right formula for your little one.

This is where a review of Vermont Organics Baby Formula comes in handy since it could very well be the formula that your baby uses and actually sticks with.

Of course, each baby and their digestive system is very different from each other, but since Vermont Organics Baby Formula is made with real organic nonfat milk and contains the ingredients and nutrition that promote healthy brain development, you’ll definitely be giving your baby what he or she needs right from the start.

Whether you’re strictly formula feeding or trying to switch on and off between breast milk and bottles of formula, the Vermont Organics Baby Formula might be what your baby needs and what he or she will eventually enjoy on a regular basis, as opposed to constantly switching between different varieties of the same brand.

The powder formula is for babies from 1-12 months of age and is made with cow’s milk from organically fed, free-roaming cows to ensure the most natural and wholesome milk is given to your baby when breast milk is not an option or simply not preferred.

Since everyone is different, though, it will ultimately depend on your baby (and his or her taste buds) if Vermont Organics Baby Formula is the right one for them.

As far as organic baby formula goes, Earth’s Best is a generally trusted brand and the Earth’s Best Organic Infant Formula with Iron is one that’s easily comparable to Vermont Organic Baby Formula.

Made with USDA organic milk from cows who ate food with no added growth hormones or antibiotics, the formula is also free from corn syrup solids that many other baby formulas contain.

But it does have both DHA and ARA, which are found in breast milk and help develop brain and eye health in infants. Not only that, but the formula also has prebiotic fiber for immunity and added iron for red blood cell development.

As the Earth’s Best formula that’s as close to real breast milk as possible, Earth’s Best Organic Infant Formula is both milk-based in order to give most babies the most gentle but also nutritional formula for their digestive systems, though it may not be suitable for all babies. 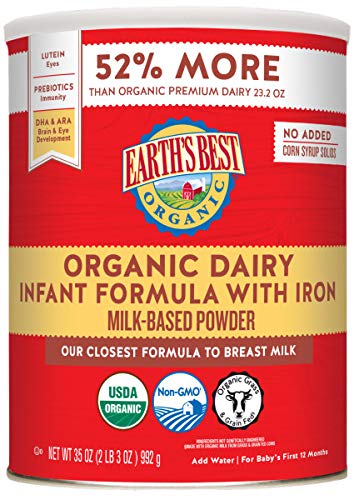 Earth's Best Organic Dairy Infant Powder Formula Buy it on Amazon
We earn a commission if you click this link and make a purchase at no additional cost to you.

Most parents might know the Plum baby brand for its toddler snacks and baby food, but it also offers the Plum Organics Grow Well Organic Infant Formula.

It’s the brand’s formula based on breast milk as much as possible and relatively easy on most babies’ stomachs. It’s also kosher dairy and gluten-free with no corn syrup solids or genetically engineered ingredients added in. Plus, like most other organic baby formulas, Plum Organics Grow Well Organic Infant Formula contains both DHA and ARA for brain and eye development in infants.

Some of the more notable ingredients of the formula include plant-based oils like organic palm oil, soy oil, coconut oil, and safflower or sunflower oils.

While the added oils might deter some parents, Plum Organics Grow Well Organic Infant Formula’s main component of palm oil contains palmitic acid which is found in breast milk and important for babies, as dietary fat is important for energy and growth.

Similac is already a trusted baby formula brand, so it’s only natural for parents to trust the Similac Pure Bliss Infant Formula, made with genuine cow’s milk from grass-fed cows first and foremost. From a brand that’s already the number one chosen brand chosen by moms and used in hospitals, the formula has no artificial growth hormones, antibiotics, or gluten.

It’s also non-GMO and halal and kosher friendly. While it’s not advertised as a USDA organic formula, Similac Pure Bliss Formula is made with gentle ingredients and the kinds of nutrients that the Vermont Organics Baby Formula also has for your baby’s development.

The biggest thing that Similac Pure Bliss Infant Formula has going for it is the fact that Similac has been creating a healthy baby formula for decades, but even besides that, this particular formula is genuinely milk-based and offers the kind of nutrition that babies get from breast milk as well.

Like many others that compare to the Vermont Organics Baby Formula, it might also be a solid choice when switching between breast milk and formula. 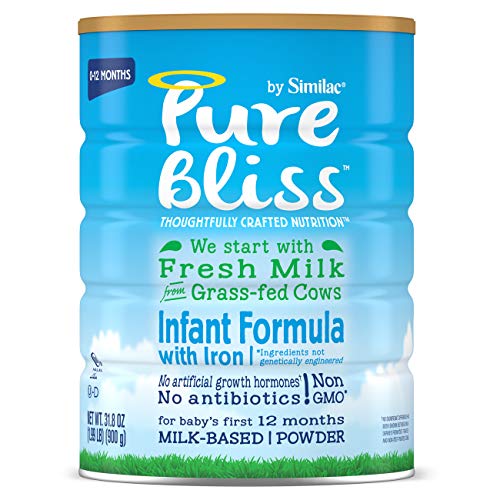 Pure Bliss by Similac Infant Formula Check Price
We earn a commission if you click this link and make a purchase at no additional cost to you.

As with any reliable organic baby formula, Vermont Organics Baby Formula isn’t the cheapest by far, but in that cost per container, you’re also getting legitimate nutrients for your baby, but without added hormones or unnecessary fillers that some other formulas may contain.

Granted, it might not be for all babies, as each baby is different, but Vermont Organics Baby Formula is designed to give the right kind of nutrition and flavor that most infants will be able to keep down until you’re ready to switch to milk.

When it comes down to it, you may indeed have to go through several different formula varieties in order to find what works best for your infant, but overall, Vermont Organics Baby Formula seems to have the right kind of nutrition to give your baby everything he or she needs, short of being made with actual breast milk.

And just in case you prefer breast milk above all else, the formula is also gentle enough to be able to switch between the two. At the very least, it’s worth a solid chance for your baby.

Non-GMO vs Regular Formula: Which Is Best for Baby? - The Baby Swag