When you have a baby shower, you’re typically gifted with the sorts of tools and supplies that will get you through the first few diaper changes before you’re crying and wondering how they let you leave the hospital with your baby.

But the truth is, some of the best baby supplies end up coming from the things you seek out and buy yourself, down the line. And one thing I didn’t even realize I needed when I had my first little one was a good, sturdy jogging stroller.

Not something that I would expect anyone else to shell out the right number of bucks for, but something I could invest in myself after doing some hearty research.

The reviews of the Thule Urban Glide sports stroller spoke highly of its sleekness and ability to keep my baby comfortable while providing a smooth ride for both him and myself. Which meant more time spent listening to my earbuds and less time getting snagged on uneven pavement, which isn’t cool.

I don’t know if I really get the whole getting your body “back” thing since a post-pregnancy body might be softer in some places, but also just gave birth to a human being and lived to tell the story. Still, being able to firm up some of that newfound softness is always a plus and that’s where jogger strollers come in in the first place.

Plus, they aren’t too small to hold a small toddler, which means that you can continue to get your runs in even after your little one is old enough to tell you to slow down out there.

The Thule Urban Glide is marketed as a lightweight jogger with the ability to roll smoothly on different sorts of pathways that moms traverse when they try to get in their daily miles, and as far as versatility and accessibility goes.

But again I say, it also lasts much longer than your typical umbrella stroller or regular stroller that your baby’s car seat once snapped into and not because the canopy fabric is more extensive! This Thule Urban Glide review of the sport stroller is all about how possible it is to give your baby and even your toddler a decent ride while you run out of reasons not to go running.

Or, you know, at the very least power walking. The best part is that the canopy folds and unveils when you need it, so your baby is not directly exposed to the sun and it can sleep peacefully while you are doing your walking or jogging, and since the tires are sturdy you will be able to push the stroller with zero issues even on rough terrain.

For the easiest accessibility, especially when using the stroller as it’s designed for jogging, the versatility of the front wheel is key.

Of course this goes for the ultra-padded seat for your baby or toddler that has the ability to recline, should they feel in the mood to be lulled to sleep as you jog.

This is probably one of the best features. Have you ever struggled with the seemingly simple instructions of pinching and sliding a stroller’s handlebar to collapse the thing? Yeah, it’s really not that simple.

The Thule Urban Glide has a maximum weight of 75lbs, which means that once your baby starts walking, you can still offer them a comfy seat inside the sanctuary of the stroller to rest those little stubby legs of theirs.

Most strollers have the requisite basket underneath, but this takes it a step further with the water-resistant storage space made to conceal your items. 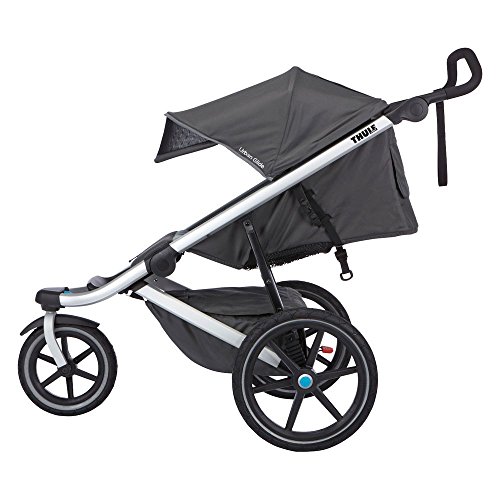 Thule Urban Glide Jogging Stroller Check Price
We earn a commission if you click this link and make a purchase at no additional cost to you.

How It Benefits The Baby

It’s Roomier Than Most

This is pretty legit. Like, if there was ever a Corvette of strollers with a seat that makes it seem like there is almost room for two, it’s this. It probably has something to do with the fact that the stroller is made for your baby and then toddler to grow with, as the weight limit is all the way up to 75 pounds.

Obviously being able to go jogging and pick up the speed is a plus for the mom or dad using the stroller, but even when you roll over bumps and uneven spots in the sidewalk that make you wonder where your tax dollars are even going, your kid will more than likely stay asleep in their little cave of comfort.

Most strollers that have umbrella shades end up stopping just shy of your baby’s eyes, creating a sort of sunray effect that frustrates them to no end. With the Thule Urban Glide, the sunshade extends to a far enough span over your kid that even jogging on the hottest days won’t phase them as much as it’ll drench you in sweat.

Sometimes, getting your growing baby to nap in their crib is a serious no-go, but more often than not, they’ll be into the idea of being lulled to sleep in a constant and even flow of a stroller, making the Thule Urban Glide jogger the right fit for the fussy times of day. Because yes, there are multiple times of the day when your kid is fussy, let’s not put on airs here.

If you’re taking your toddler out on your run but they’d rather sit back and relax in the comfort of the jogger, then give them the star treatment. The inside pockets of the stroller enable you to slip in some toddler-friendly snacks or fruit and maybe even your old IPod that they’ve taken over as their own.

Why It’s Good For You Too

The weight of a regular sized stroller is easily the number one reason why most parents go for the umbrella strollers, despite the fact that kids grow out of them way too fast. But the Thule Urban Glide weighs 23 lbs on its own, sans baby.

There Is Legitimate Storage

The basket underneath the stroller, which also has a covering that makes it water-resistant, is more than a shaky little basket to shove your purse into.

You Can Go Long Distance (Kind Of)

That is, if you’re interested in jogging literally all over the neighborhood to get in those miles. Since the stroller provides such a smooth ride, there is much less of a chance of your kid sitting forward at the first stop and demanding, “Out!”

Again, this cannot be stressed enough, because literally fighting with a stroller isn’t cute when you have your kid balanced on your hip and the neighbors are starting to stare.

Of course, there are some other jogger alternatives, should the Thule Urban Glide not be what you’re looking for but honestly, the stroller has almost everything you’d need in a stroller of its kind.

Some improvements could be made on the quality of the water-resistant basket or the fact that there are no cup holders, but that’s also like saying that a three-layer chocolate cake would be better if there was one more
layer to it.

The Thule Urban Glide is already plenty good, it just needs a few adjustments and additions to hit that perfect mark. If you like this model and you have twins, you should also check the Thule Urban Glide Double Stroller which also has amazing reviews and is trusted among parents because of its exquisite performance.

Nuna Mixx Review [2021 Version] - Is This The Best Stroller for Your Baby? - The Baby Swag

Nuna IVVI vs MIXX: Which Nuna Stroller Should You Choose? - The Baby Swag

[…] They’re not designed to be used as jogging strollers. The suspension is great, but you’re better off using a stroller specifically designed for jogging (like the Burley Solstice Jogger or the Thule Urban Glide). […]

I bought my son a Thule Urban Glide. I found this stroller very good for traveling with my son. Thanks for your post !!!