New parents are constantly warned about trivial fussiness and even the possibility of their new babies rejecting most formulas at first, but in the grand scheme of things, there are bigger digestive issues. Which is where this Gerber Good Start Soothe review will help parents in making an informed formula decision.

Since excessive gas and subsequent colic can affect plenty of newborns, getting a formula that is made specifically to treat those issues could make a huge difference in the digestive systems of babies.

Even for parents who choose breast milk over formula, sometimes the different gastrointestinal issues become things that can’t be dealt with unless parents turn to varieties of formula that are made to aid indigestion. Gerber Good Start Soothe is a formula designed to reduce colic, gas, and fussiness in babies, but also to provide nutrition. 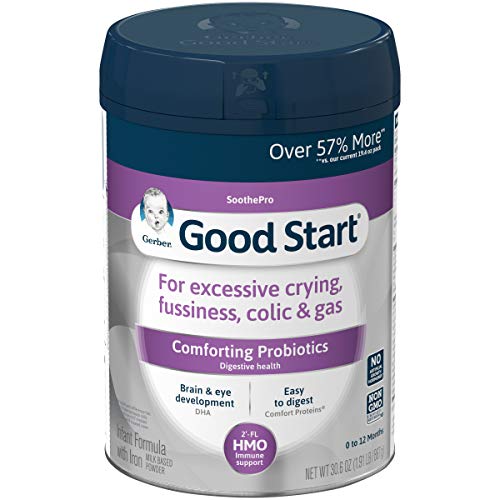 Soothing Nutrition: Modeled after the complete nutrition and gentleness of breastmilk, this formula offers nutrition for babies up to 12 months experiencing colic, excessive crying, fussiness and gas.

As another non-GMO formula made to supplement the nutrition babies might be missing from breast milk in a healthy way, Enfamil Gentlease is also made to treat and soothe colic in babies. According to its website, it’s also the “#1 Pediatrician recommended brand for gassy and fussy babies,” which should give new parents plenty of peace of mind.

The formula also advertises as many as 30 helpful nutrients to promote health and growth in babies while treating gas and fussiness. It comes in either powder form or individual bottles and can be found on the manufacturer’s website in bulk. 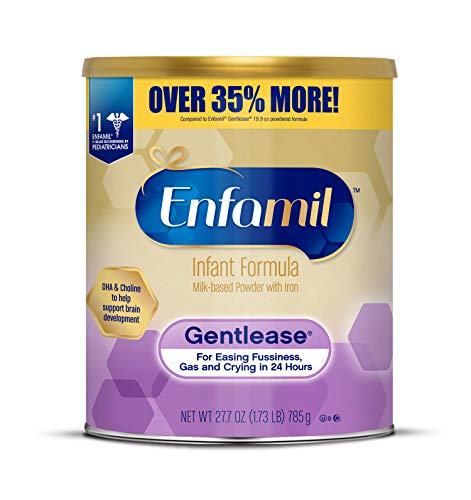 We gave Enfamil Gentlease a slight edge over Similac Sensitive because it is not as thick, is suitable for most babies, and also happens to be the most affordable option.

Buy at Enfamil.com
We earn a commission if you click this link and make a purchase at no additional cost to you.

Made specifically for both colic and food allergies, the Similac Alimentum formula is good for babies who are allergic to certain food proteins or prone to colic behavior, and those who may need a healthy fat supplement in their diet in order to gain the right amount of weight for their age.

Gluten-free, the formula is a breast milk alternative that is formulated to minimize the gas in fussy babies in a 24 hour turnaround time from babies drinking it for the first time.

Since the formula in Similac Alimentum is made to treat colic that comes about specifically because of a protein sensitivity, it may not work for all babies. But like any other formula similar to the Gerber Good Start Soothe, it’s another one that’s worth a try.

As an organic formula, Earth’s Best Organic Sensitivity Infant Formula with Iron is designed to treat fussiness and gas in babies, mainly with its DHA and ARA contents, which are both found in breast milk and contribute to the eye and brain development of babies. It’s also low in lactose and contains whey while remaining easy to digest for babies’ small stomachs.

The formula also has iron, which promotes red blood cell development, and its low lactose recipe makes it easier to digest for babies who may have an intolerance to milk or who are colicky or fussy from the gas that sometimes comes along with dairy in babies.

“Only formula my nursed babies could take that wouldn’t give them belly aches. Great for supplementing an acid reflux baby. Just wish It didn’t take me trying 4 others before we found this one.” – Ashley on Amazon.

“Absolutely love this formula! We tried everything and this is by far our favorite. No stinky spit up really and the ONLY one I’ve found with probiotics. Which are sooooo good for their immune systems.” – Kstrat on Amazon.

“Baby had reflux and we tried one other formula before the doctor recommended this. There was no going back or trying anything else after trying this. Right from the start, we noticed a HUGE difference with his level of comfort, sleep, he was crying less. I was so happy to find a product that honestly did soothe him. Totally worth every penny.” – Penny on Amazon.

Final Thoughts: Does Good Start Soothe Live up to the Label?

Even if a baby isn’t born with colic or doesn’t suffer from extreme gassiness in the first few weeks, if parents are going to shoot for formula feeding over breast milk, the Gerber Good Start Soothe might be smart right from the beginning. The health benefits of the formula are also hard to ignore, as they are formulated with enough nutrients and vitamins to supply the baby with the right nutrition while at the same time helping him or her with their colic.

It may just be a stepping stone on the way to finding the right formula for each individual family, but the Gerber Good Start Soothe formula is definitely one to consider regardless.

Soothing Nutrition: Modeled after the complete nutrition and gentleness of breastmilk, this formula offers nutrition for babies up to 12 months experiencing colic, excessive crying, fussiness and gas.

Enfamil Gentlease vs Similac Sensitive - Which "Comfort" Formula is Best? - The Baby Swag

[…] formulas (like the Good Start Gerber Soothe Infant Formula) include probiotics, which is great for improving gut health. This is a good option to try and may […]

Gerber Gentle vs Soothe - Which Baby Formula is Best? - The Baby Swag

Similac Sensitive vs Pro Sensitive: Which is Best for Your Baby? - The Baby Swag

[…] Gerber Soothe infant formula – this formula comes with non-GMO ingredients and contains HMO which boosts immunity while also promoting a healthy digestive system. Due to its probiotic content, this formula alleviates symptoms such as fussiness, gas, bloating, tummy pain, and crying; […]