There’s nothing quite like the first time your home fills with the seemingly endless noise of battery-operated toys. In this case, that would be musical instruments for babies. But choosing from the best toy guitars for babies isn’t the easiest thing in the world.

You have to specifically consider whether or not he or she will get enough use out. Then, you have to wonder if there are any educational benefits to it.

The best thing you can do for your baby is to expose him or her to new sounds and colors. Along with music, you can promote moving and dancing. You might as well spark some interest in important things like colors and shapes. As noisy as they might be over time, toy guitars for babies can have benefits for your child in the long run.

Since this is a toy guitar for your baby rather than your small child, you aren’t going to need anything too complicated or with strings that could snap at any minute.

Instead, the important things to look for are easy-to-access buttons and some educational value that it might provide. It’s also convenient if you can find a toy guitar that will last your little one a while so they can really get a ton of use out of it. You might grow to dread the sometimes shrill sound of such a toy, but it’s all in the name of your baby’s happiness, right?

There are five different rock tunes for your child to enjoy and play along with and the guitar lights up as each song plays, which adds to the fun for them. As your little one gets older, he or she can also hold the guitar and dance along with the music, so you’ll be able to get them moving with it too. 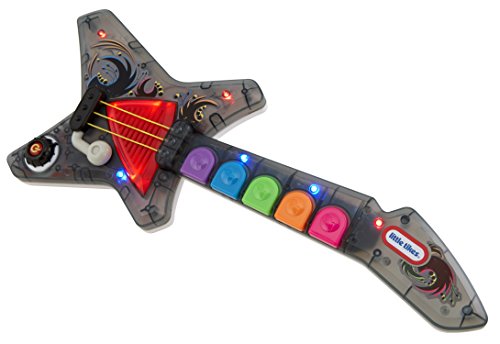 Little Tikes PopTunes Guitar
$39.95
Check Price
We earn a commission if you click this link and make a purchase at no additional cost to you.

If for you, the whole point of getting your baby a toy guitar is so that they can learn from the music involved, then The Learning Journey Little Rock Star Guitar may be your best bet. While there is the music aspect, with three different groups of music, a drum button, and even a whammy bar, there are also other qualities about the guitar your little one (and you) are sure to enjoy.

There are also three different play modes to help engage your child in learning activities and multiple musical buttons that also light up for your little one’s entertainment. And since the guitar has big buttons, it shouldn’t be hard for babies to be able to push them while they play and learn which ones they enjoy the most. 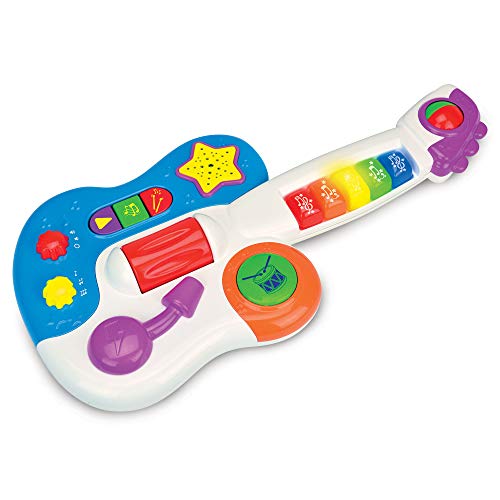 The Learning Journey Early Learning
$18.48
Check Price
We earn a commission if you click this link and make a purchase at no additional cost to you.

Although the VTech Strum and Jam Kidi Musical Guitar Band is targeted toward toddlers started at age three, there’s no reason your younger child can’t still enjoy it early on, especially as it has more than just the typical buttons, lights, and sounds, but also little strings they can actually strum.

It can also be folded in different ways to allow your child to have played at drums and even the keyboard, making it plenty versatile for those young changing minds.

And with all of the sounds, lights, and sounds come 12 different popular kids’ songs and music to entertain and delight your little one. It even comes with a strap so your child can feel like a real rock star as they engage in imaginative play with the guitar.

VTech Strum and Jam Kidi Musical Guitar Band
$21.99
Check Price
We earn a commission if you click this link and make a purchase at no additional cost to you.

Having a toy guitar that plays different tunes is all well and good, but the B.Woofer Hound Dog Guitar also plays music with words for your child to learn from and sing along with too. It has 20 different sing-along songs, along with nine “Peppy Puppy” songs as well for your baby to enjoy.

With the different chords on the buttons, the guitar will help teach your child rhythm and musical patterns, along with patterns in general, in a way, which makes the guitar even more useful.

There are also strings small and gentle enough for little hands and, best of all, auto shut-off after two minutes and a volume control option via a small dial on the side of the guitar. And just in case your kid decides to go full-on rock star mode, it’s durable enough to withstand a few falls to the floor. 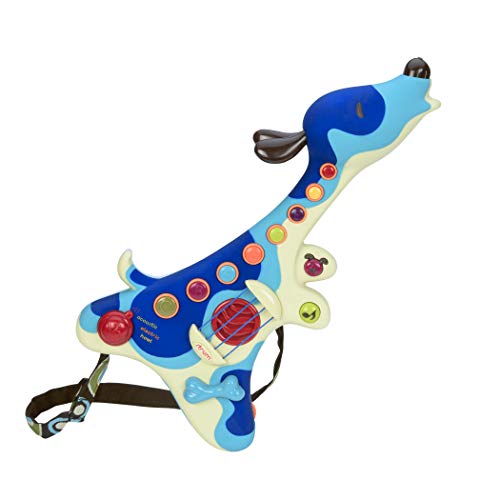 B. Woofer (Hound Dog Guitar)
$38.00
Check Price
We earn a commission if you click this link and make a purchase at no additional cost to you.

While admittedly the PlayGo Baby Rock Star Guitar doesn’t do a whole lot compared to other toy guitars for babies. It does have pretty much anything a young baby could want or need in such a toy. It lights up, has a few fun buttons to press to add some music to your baby’s playtime, and is lightweight enough for them to try and pick up right away.

It even has a little mini whammy bar to add to the fun of it and make your baby feel like a real musician, even if there aren’t a ton of bells and whistles involved with it. 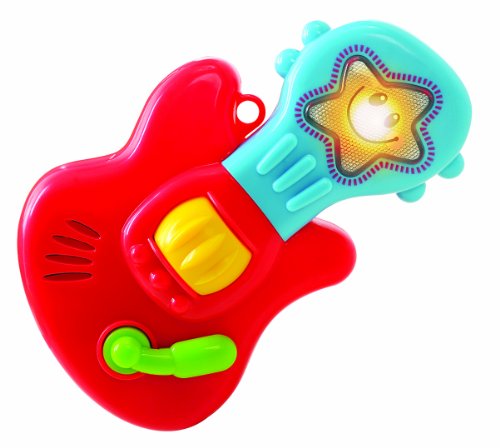 PlayGo Baby Rock Star Guitar
$11.53
Check Price
We earn a commission if you click this link and make a purchase at no additional cost to you.

Chances are, your baby already responds to most things Baby Einstein, so the Baby Einstein Rock Light and Roll Guitar is just another fun thing to add to the mix to entice your little one. You can set the guitar on the floor in front of your baby and allow them to play that way and as they learn to, they can eventually pick it up to play with on their own while still enjoying the 10 different little songs the guitar plays.

If they spin the ball rattle, it initiates more music and the lights to go with them and the three differently colored buttons can activate shorter songs, which can be a useful thing at times. There are also two different volume settings, so you won’t be automatically subjected to over-the-top loud sounds with your baby’s toy guitar. 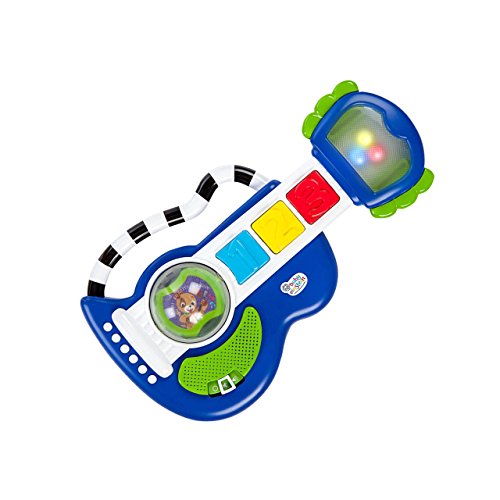 Baby Einstein Rock, Light & Roll Guitar Musical Toy
$14.98
Check Price
We earn a commission if you click this link and make a purchase at no additional cost to you.

Right away, your baby will probably be attracted to the fun shape of the Vokodo Dinosaur Guitar since it’s shaped like a dinosaur and even has a detailed belly and scales that light up. There are different ways to enjoy the guitar, whether your child opts for the musical buttons that have different musical instruments on each of them or the exploration buttons with different dinosaurs on them.

There are also little learning games that are activated when your baby touches the different buttons with a voice that speaks out from the guitar to further entertain and interest your little one, even if he or she is too little to understand it all just yet. 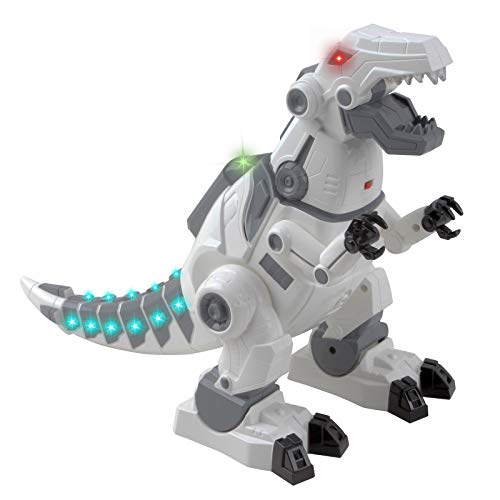 Vokodo Walking T-Rex Robot Dinosaur Check Price
We earn a commission if you click this link and make a purchase at no additional cost to you.

The most educational thing about toy guitars for babies is the music and lights and sounds they offer for visual and auditory stimulation. But that’s still a good thing for your little one. They get to learn about rhythm and patterns in music, and they also get to get up and move to the music so they aren’t just sitting still the entire time.

Not many of the guitars are for very young babies. But if you supervise your baby, you can help them learn the different buttons. In most cases, you can easily have your child go from playing with the guitar on the floor to actually getting up and dancing around with it.

You may eventually find that your child will need one as a baby. And eventually, as they get older and grow tired of their first one, they ask for a new one. In any case, they’re going to have plenty of noisy fun.