Technically speaking, the toddler age ranges from 12-36 months, or 1-3 three years old. In that time, your child will grow from an unsure crawling and babbling baby to a self-assured walking and talking toddler ready to enter preschool. But it’s also an age range where your little one is enamored with music, lights, and other sounds that all serve in entertaining them.

Not only that but playing with musical toys can benefit your child’s development greatly throughout their toddler years. Through playing with musical toys, which sometimes include lyrical songs, toddlers can remember things they learn through them, such as the ABC’s or simple nursery rhymes. Musical toys also serve well in engaging your toddler’s attention in general, which is a wonderful benefit too.

Musical toys can also help toddler tune their excellent motor skills, depending on the toy, and help teach cause and effect for them. Plus, bonus points for toddlers who like to dance, as playing with musical toys will make them want to get up and move around.

Yes, there are also plenty of musical toys that don’t necessarily teach your toddler anything besides how to make a lot of noise, but that’s also part of the fun for them. Whether your little one prefers electronic musical toys or more simple ones, these are a handful of the best musical toys for toddlers that are bound to hold their attention make them feel like making music.

Your child’s first drum set can either be the real thing or the toy version of it with the VTech KidiBeats Drum Set. And honestly, the latter is the better option, if only for the “off” button.

There are a variety of different tunes your child can beat the drums and symbol to, or they can opt for the freestyle option and make music all on their own. The songs programming in the drum seat are even designed to help teach your toddler letters and numbers, so they’ll be learning along the way.

In addition to the music and songs, your child will also likely enjoy the LED lights on each drum, which only adds to the fun for them. It isn’t precisely replaceable for an actual drum set that your child might want later on down the line, but if they’re looking for drums to make music on and they’re far too young for the real thing, this set could indeed work. 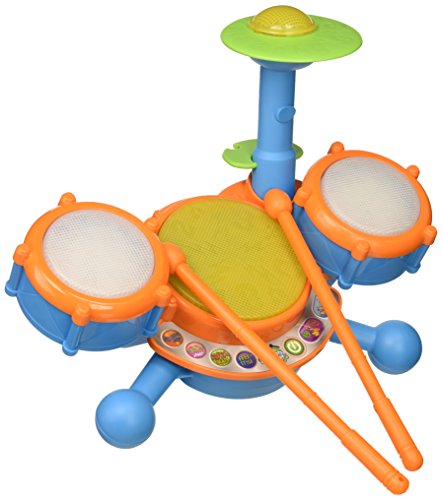 VTech KidiBeats Drum Set
$15.88
Check Price
We earn a commission if you click this link and make a purchase at no additional cost to you.

The B.Meowscis Keyboard is another musical toy for toddlers that serves as an easy substitute for the real thing, especially when you don’t know for certain if your child will even enjoy playing the piano.

Instead, they can enjoy learning different songs and rhythms while also singing along with the attached microphone. In fact, it has five different rhythm sounds, 20 familiar songs, and seven cat-themed songs to get your toddler in the mood to play music and sing along to.

The keyboard can also record your child’s musical creations, and while they may not be creating the next big hit, it’s still a fun feature to enable them to listen to their music with you afterward. It’s also plenty sturdy, so if your toddler is prone to dropping or kicking toys more often than not, this may be the best keyboard option for you. 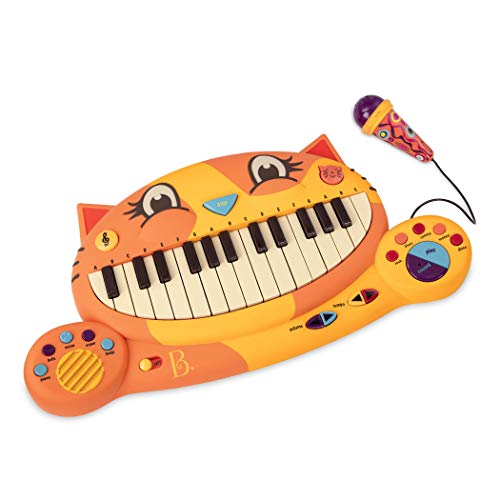 B. toys – Meowsic Toy Piano
$54.01
Check Price
We earn a commission if you click this link and make a purchase at no additional cost to you.

There’s something about toddlers and drums and with the Little Tikes Tap-A-Tune Drum, it can further their interest in making noise by banging on something.

It comes with two drumsticks that can be attached to the drum when not in use, and your toddler can either use those to make music or tap the top of the drum with his or her own hands to make a beat. They can even run the drumsticks on the sides of the drum for a washboard music effect.

And because there are no lights or electric sounds, you’ll never need to switch batteries or worry about the drum malfunctioning. In a way, some kids might get bored because of the lack of bright lights emanating from the drum, but it can also take you back to the basics, and if it’s your toddler’s first musical toy, it’s acceptable. 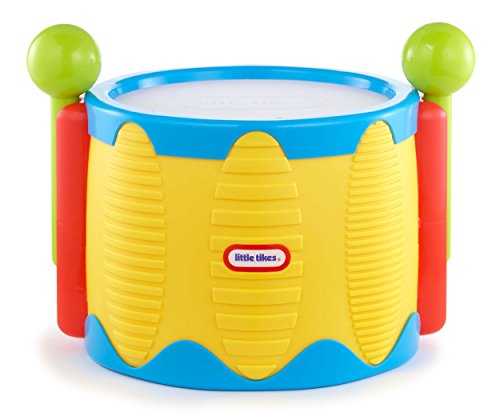 Little Tikes Tap-A-Tune Drum Check Price
We earn a commission if you click this link and make a purchase at no additional cost to you.

The VTech Strum and Jam Kidi Musical Guitar is by no means a substitute for the real thing for your toddler, but it will make him, or her feel like a rock star as they make music. It does have a few guitar strings for your child to use, but also keys to mimic a keyboard and a ton of songs they can play along with or learn from.

The most unique thing, however, is the fact that you can fold it up so that the guitar becomes a keyboard with a little drum and symbol to play on as well. That way, if your toddler gets bored more easily than most, they can continue with playing with the guitar in a whole other way.

Besides being a three-in-one toddler guitar, it indeed does allow for imaginative play for your little one.

VTech Strum and Jam Kidi Musical Guitar Band
$21.99
Check Price
We earn a commission if you click this link and make a purchase at no additional cost to you.

The true beauty of the Play 22 Keyboard Playmat is that because of its size and accessibility, your child can get use out of it for years. Not only that, but you can even play music along with them, which will likely make them want to continue to play as opposed to growing bored from it.

The piano can play via different musical instrument sounds, including that of the piano, violin, saxophone, clarinet, banjo, trumpet, xylophone, and guitar. And, of course, you can also adjust the volume as needed and record the music for playback later on.

You also can’t ignore the sheet nostalgia that the floor mat keyboard provides for most parents. You definitely can’t blame yourself if you take it out long after their bedtime. 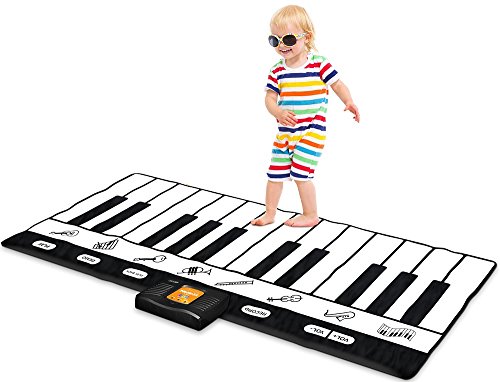 Play22 Keyboard Playmat
$35.99
Check Price
We earn a commission if you click this link and make a purchase at no additional cost to you.

You’d be hard-pressed to find a toddler who doesn’t love the sound of their own voice, so naturally, they’re going to want a toy microphone like the FunsLane Kids Microphone at some point. There are a ton of features your toddler, and even younger child are sure to enjoy, from the voice changing element to the recording mode to allow them to hear their silly voice played back to them.

Then there’s the music, lights, and even an applause button to get your little one in the music making the mood. And with the speaker on the bottom, you won’t have to worry about your child’s hand covering it up or muffling it by holding onto the microphone itself. 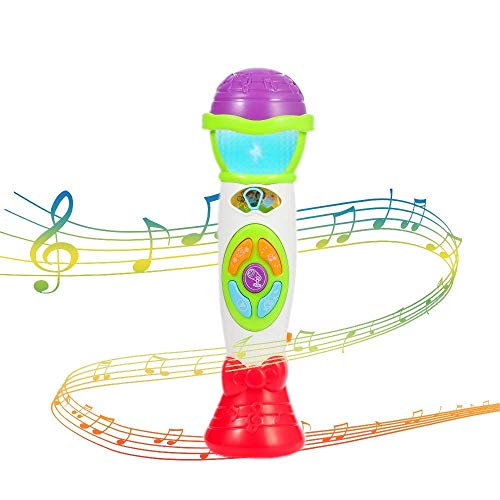 FunsLane Kids Microphone Toy Voice Changer
$11.99
Check Price
We earn a commission if you click this link and make a purchase at no additional cost to you.

There’s no getting around it. Your toddler will undoubtedly enjoy music in some capacity, from singing in a toy microphone to pretending to strum on a guitar. Why not invest in one of the best toddler musical toys to get your child moving to the music and making music of their own as early as possible?

Of course, not all parents love the incessant noise that comes along with loud battery-operated toys in the home, but if your toddler is getting some enjoyment and he or she is having fun learning new songs along the way, it’s a small price to pay. Plus, in some cases, there are volume buttons, so all is not lost.

Then again, there are toddler toys that require no batteries at all, and if that’s what you’re looking for, then you also won’t have a hard time finding those these days either. There really is something for every child and every parent to get enjoyment out of, especially if it’s a musical toy you want to play with together.