There are few sounds sweeter to a parent than the absence of musical toys, but sometimes you have to take one for the team and let your child see what kind of musical instrument they might actually have a flair for. Since it can be expensive to invest in some of them, it might be better to start with the smaller scale versions, like small toddler pianos.

This is why it might also be a good idea to compare the Schoenhut vs Melissa & Doug Piano. Both are exceptional in quality, and the ability to really get your toddler started as far as playing the piano is concerned, but of course, there are going to be some inherent differences in the different brands.

Right off the bat, you’ll probably notice that the Melissa & Doug Piano is a lot less expensive, and if cost is your number one deciding factor, that that might make the decision for you right there. However, the Schoenhut might mimic the real thing a little better and can be used with your child starting at age three, while the Melissa & Doug Piano begins at age four.

Overall, there are a few key areas to look for with each of these, though. The cost is, of course, a big deal, as is the size of each of them and any learning booklets they come with to help your child learn to play the piano.

The pianos themselves, along with any brochures, aren’t a substitute for actual piano lessons, but with either of these, your child will be off to the right start. Before that, however, you’re going to have to choose between the Schoenhut vs Melissa & Doug Piano.

The Schoenhut brand is known for its premier children’s instruments and of course that includes the Schoenhut Concert Grand Piano. As a 37-key baby grand piano replica, it has everything your toddler will need to get started on their musical journey, including a convenient bench made just for their small size.

The keys themselves make small chime sounds when your child presses on them and thanks to the Tri-Play Learning System made especially for this particular piano. Your child should have no problem getting the hang of it.

While the piano might look like it’s made for children who are already experienced and talented with the piano, it can still be purchased for those little ones who just want to learn.

The hinged top of the piano can be propped open to hearing the sounds of the different notes better, but just in case it accidentally closes, it’s a soft close, so your little one won’t hurt his or her fingers. The realistic style of the piano, which is a miniature version of the real thing for adults, will surely attract children and help them get excited about learning to play the piano.

“Bought this as a Christmas gift for my four-year-old granddaughter. She loves it. It looks nice and plays easily. One leg was a little unstable, but we were able to add a bit of wood glue which solved the problem.” – Debra Kraemer on Amazon.

“The Schoenhut Concert Grand Piano is fantastic. The piano looks just like a real Grand Piano, and the cabinetry finish is beautiful. With 37 keys, it is fully capable of playing a large selection of music. The key guides are beneficial when learning to play, and the sound and tones are very good.” – D. Foster on Amazon.

“Very classic. A piece of heirloom that can be pass on from generation to the next generation. The sound is nothing close to an original piano but the looks and the feeling while playing seem so real.” – Rico on Amazon.

“I purchased this piano for my Granddaughter who is 20 months old. Her Father is a Pastor so she relates it to church. She is having an amazing time singing and playing her baby grand piano.” – Mildred on Amazon. 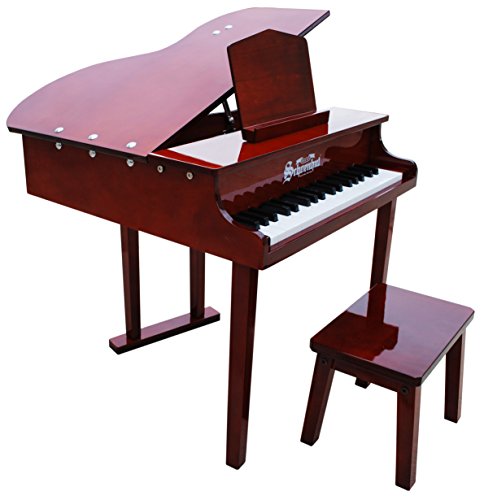 Schoenhut 37 Key Concert Grand Piano Check Price
We earn a commission if you click this link and make a purchase at no additional cost to you.

The Melissa & Doug Learn To Play Classic Grand Piano is very similar to the Schoenhut in its overall design and the fact that it’s made to look like a full-sized piano that adults might use. It even has a similar little bench that will, for the most part, remain in place without easily tipping over.

The 30 piano keys offer an easy introduction to playing the piano for little ones, and they’re each already labeled to help your child along in the beginning and even as he or she gets the hang of playing.

You can choose to leave the top of the piano closed or lift it up thanks to the sturdy hinge and keep it in the style of a standard baby grand piano.

It also comes with a songbook to teach your child how to play, with colorful notes that stand out and are similar to those already labeled on the actual piano. Overall, the style and size of the Melissa & Doug Piano are quite identical to the Schoenhut, but some minor differences do stand out, including the cost.

“Love, love, love this! Get lots of positive feedback from everyone who sees it. Well made. The lid goes both up and down. Keys are not too little or thin but are proportionately made for little hands, simulating a real piano. Looks cute next to my 6-foot grand and the baby loves to play it.” – Linda Franklin-Biggs on Amazon.

“Very impressed with how well made this toy is made. Bought for a 6 yr. old ,but the 3yr. old loves it too. I really like that the bench is made to not tip over, very well thought out.” – David R. Gillespie on Amazon.

“Got this for my six-year-old niece and she loves it. It is more of a chime-like sound to it; however, it is a learning piano, and I expected this. The book that comes with it has a good selection of songs to learn. With its color-coded key above the piano keys it is easy for her to play by herself. She has memorized a few songs already!” – Cari Rock on Amazon.

“We were very impressed with the quality of this little piano, and my nephew loved it. It sounds a little “tinny” but that is probably to be expected because it’s a toy. I think it will be a nice intro to hands on music.” – A. Hansen on Amazon. 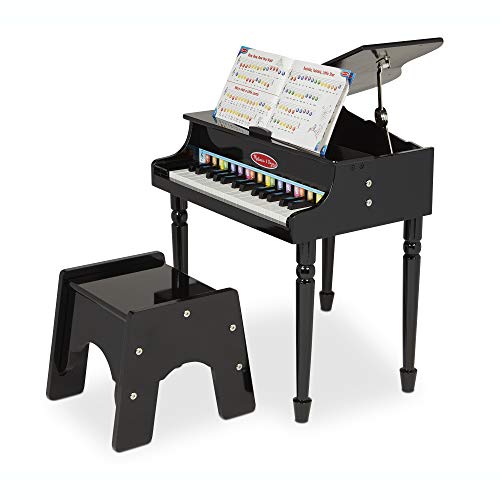 Melissa & Doug Grand Piano
$249.00
Check Price
We earn a commission if you click this link and make a purchase at no additional cost to you.

In a perfect world, your child would try out one of these pianos, fall in love with it, and become a musical child prodigy. That may or may not happen, but if you want to have the best chance at your child even enjoying their experience and you being satisfied as well, then you should probably go with the Melissa & Doug Learn to Play Classic Grand Piano.

Compared to the Schoenhut, it’s considerably less expensive, which you really can’t ignore. Yes, the Schoenhut can be put together in a matter of minutes, but the Melissa & Doug Piano has 30 little keys which are all already labeled to make the learning process that much easier.

As always, it’s totally up to you to decide which product is the best for your child and which one he or she will get the most use out of, but Melissa & Doug is the stronger option of the two pianos.

These pianos obviously go well beyond simple musical instrument sets that your child might get at his or her first birthday party. These are the real deal, meant to hone your child’s talent or at least help them figure out if they have a real knack for playing the piano.

In a way, it might seem like one of the pianos is more serious than the other, but they’re both meant to do the same thing for your child and help him, or she learns how to play without putting them in front of a big and intimidating full-sized piano.

Whichever one you end up picking for your child will be useful for them regardless of what it might lack that the other one has and vice versa, but as with any big purchase for your kid, it’s important to look at the products from all sides.