There’s nothing in the parenting handbook that says you need to go with organic formula if you need or choose to go with formula for your infant (formula fed infants).

But if you do have to go the formula route, Plum Organics Formula may be the way to go.

Plum organic infant formula offers a variety of different formulas to help babies with digestive issues and other baby´s health problems like those who are in need or more iron, and once your baby has moved on to baby food, you can stick with the Plum brand like their organic food for babys.

But, until that time comes, Plum Organics Formula is the perfect alternative to human milk or something to use in addition to breastmilk, especially in your baby´s first year.

The taste and ingredients are meant to be as close to the real thing as possible, and it has no added corn syrup solids. It’s got DHA ARA for a healthy brain, eye development, and all your baby’s development and it’s completely non-GMO organic.

Although all babies are different, Plum Organics Formula is also extra gentle on babies’ stomachs, thanks to his prebiotics, which is a big deal, especially for those with colic or gas issues. That could be because it’s also made with casein and whey protein, which are protein sources found in actual breastmilk. Use Plum Organics Formula to supplement your breastmilk, use it in place of breastmilk, or as a weaning formula as you start to slow down breastfeeding.

It may be considered a little more costly for some families, especially compared to similar organic formulas, but thanks to its ability to mix well and taste like the real thing, this corn syrup-free formula it’s well worth the cost. Of course, there are plenty of other facets to look at before deciding if this organic infant formula is right for you. You can buy it on Amazon (and some other select online retailers) or in most retailer supermarkets.

Has Plum Organics Formula Been Recalled?

There are no recent, or current recalls on Plum Organics Formula.

First up, I’ll say that our preference for the best – top of line – formula is to go with one of the European organic options from grass-fed cows like Holle, HiPP, or Lebenswert.

If your little one is struggling to digest conventional formula or even US-based certified organic formula, it may be worth trying! It certainly helped our #2 who ended up having a pretty serious allergy to corn or corn syrup. To this end, you may also want to check out non-dairy (typically goat milk-based) formulas.

A reliable supply chain, excellent prices, and AMAZING customer support. Huggable is the NEW startup for European baby formula that's disrupting the industry. One of our GO-TO online stores!

Shop Huggable
We earn a commission if you click this link and make a purchase at no additional cost to you.

With that said, the following are all US-based brands, similar to Plum Organics. This means they are typically available in most supermarkets or major online retailers (European brands are harder to find).

Like Plum Organics, Happy Baby Organic Infant Formula has different stages and different options depending on your baby’s digestive issues and overall baby’s health, but you can use it for your infant for the first 12 months of his or her life.

The formula is modeled after breastmilk to be as close to the real thing as possible, much like Plum Organics. And it has four times the amount of prebiotics than a lot of other similar organic baby formulas which makes it a great organic infant formula. There are also no corn syrup solids added to the ingredients, but there is DHA and ARA for your baby’s development as they grow, as well as folic acid to promote healthy cell growth.

If your baby has issues with organic lactose, you can opt for one of Happy Baby’s other lower lactose formulas. But as it is, the formula is made with milk from cows raised on organic farms, which makes the formulas naturally sweet where it needs to be. You can find it on the manufacturer’s website and on Amazon or in-store at Target.

Has Happy Baby Formula Been Recalled?

There are no current or recent recalls on this particular formula. 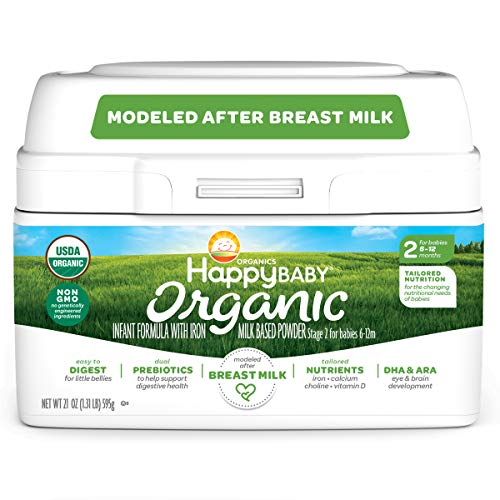 Happy Baby Organics Infant Formula Buy Now
We earn a commission if you click this link and make a purchase at no additional cost to you.

Earth’s Best is known as one of the top formula brands and Earth’s Best Organic Infant Formula is another one comparable to Plum Organics Formula. You can choose from dairy, soy, and sensitivity options to target your little one’s specific needs and in each case, the formula gives your baby what he or she needs to grow and develop in their first year.

There are no corn syrup solids added, and the formula includes Omega-3 DHA and Omega-6 ARA fatty acids (DHA and ara blend) which are found in breast milk, for your little one’s brain and eye development. This formula also has lutein for the eyes, furthering the nutritional value of Earth’s Best. You can find it on Amazon or in-store at Target.

There are no current or recent recalls on Earth’s Best Organic Infant Formula. 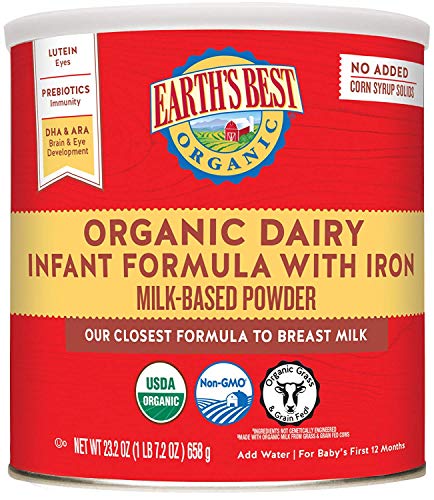 Check it on Amazon
We earn a commission if you click this link and make a purchase at no additional cost to you.

Similac is another brand parents already trust, so Similac Organic Infant Formula is a top option to compare to Plum Organics Formula. It’s made with organic milk and other organic ingredients, including Similac’s special OptiGro mixture of nutrients. The blend includes DHA, AHA, lutein, Vitamin E, and prebiotics for your baby’s health, development, and immune system.

There are no added artificial growth hormones, as you might see in some other formulas, and it’s all meant to aid your baby in his or her first year. Depending on your baby’s specific needs, though, Similac offers so many different options to help soothe sensitive tummies and prevent colic and gas issues that might arise. You can buy the formula on Amazon or in-store at Target and Walmart.

There are no recent, or current recalls on Similac Organic Infant Formula. 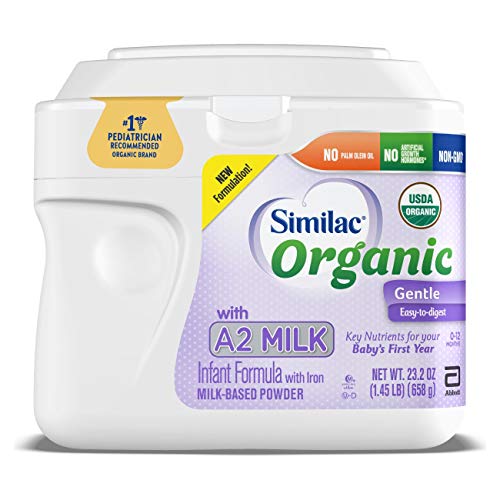 New and improved Similac Organic with A2 Milk is baby formula modeled after breast milk and made with organic lactose. It is a gentle, easy-to-digest infant formula made with A2 milk and USDA-certified organic ingredients. It provides support for baby’s brain and eye development with an exclusive blend of DHA, lutein, and vitamin E, nutrients found in breast milk.

The Enfamil Premium Non-GMO Infant Formula comes in one option for newborns from 0-3 months of age and the infant option for little ones from 0-12 months old, which is, of course, the more ideal option. Either way, though, it has Enfamil’s Unique Triple Health Guard blend which includes 30 different nutrients for your baby’s growth and development.

Like Plum Organics Formula, it’s meant to be close to breastmilk in both taste and nutritional benefits in healthy brain development. In fact, it’s said to have twice as much DHA for brain development than Similac has, which is a huge deal. It also has inositol for growing brains, which is something typically found in breastmilk alone.

You can buy the formula on the manufacturer’s website and on Amazon or in-store at Target.

There are no recent, or current recalls on this formula. 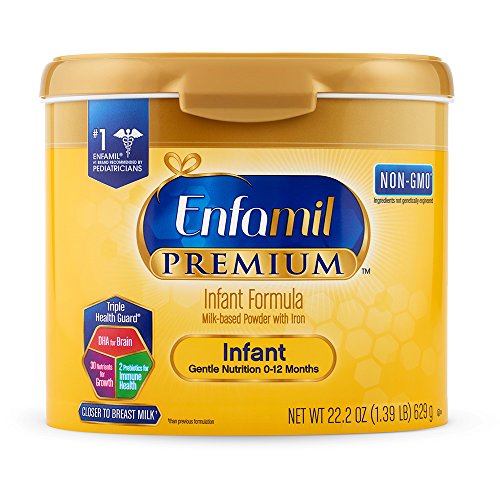 Enfamil PREMIUM Non-GMO Infant Formula Check Price
We earn a commission if you click this link and make a purchase at no additional cost to you.