There comes a point when you will have to stock up on infant feeding bottles and this can be really confusing since you will encounter different designs and you will definitely get nipple confusion since you will not know whether your baby (newborn to toddler) will like and whether it will be good enough when it will come to reduce colic.

In the first few months of your baby’s life, you may be just breastfeeding, but once you start introducing water and juices that means that you will have to find lots of glass and plastic bottles that are BPA free that your little one will use, and if you choose plastic, you will have to find those that are easy cleaning with warm water and with a silicone sleeve.

Now that we have given you enough details about finding the right bottles for your little one, we are dedicating this Nanobebe review to all those moms who are looking for an innovative plastic bottle that is easy to clean with a bottle brush and that your baby will like too.

As strange as it might sound, especially to a parent who’s far from new to the game, the Nanobébé Bottle is truly unique in its design and concept. It’s made to mimic the breast in the most authentic way, given the shape of the nipple and bottle overall, yet it can somehow hold up to five ounces of milk or formula.

The design of the bottle makes it easier than ever to not only transition from breast to bottle but to be able to go back and forth much easier with your baby. It may not have a bottle base to hold onto, but the bottom of the bottle is concave, which makes it easier for little hands, such as your baby’s, to grip it sooner and start to feed him or herself sooner than he or she would with your typical baby bottle.

The strengths of the Nanobébé Bottle don’t just lay with its shape, though. The nipple itself has two vents to release air and help prevent colic and discomfort in your baby’s digestive system. 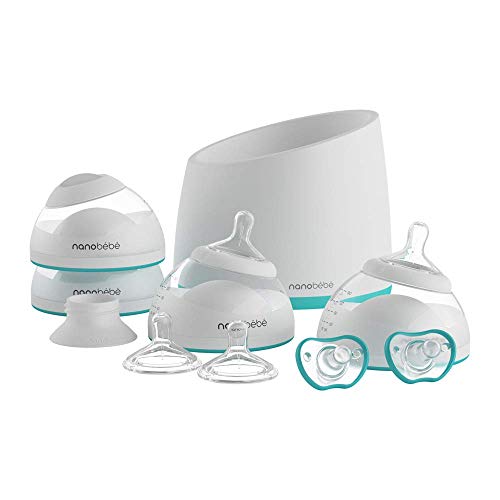 Is the Nanobebe Bottle System Worth it?

The short answer is YES. While it depends on many factors specific to your baby, we loved the natural approach, mimicking a human breast PLUS the built-in anti-colic. This is particularly effective for breastfed babies (fully or partially).

The Mimijumi Not So Hungry Breastfeeding Baby Bottle may not be made in the same unique shape of the Nanobébé, but it is much smaller than some other bottles out there, designed specifically for little hands.

The nipple has a broad base, meant to mimic that of the real thing and once again, make the transition between breast and bottle that much easier. The bottle can hold up to four ounces, so it does hold one less ounce than the  Nanobébé, but it’s very easy to clean, as the bottle itself is short and wide rather than tall and narrow.

In fact, you won’t even need a bottle brush. The nipple also has a venting system made to help reduce the chances of colic after feedings and to lessen any air intake while your baby drinks.

Plus, it has a non-skid bottom to help prevent tipping over or sliding around on tabletops, as well as a silicone lid to keep the nipple safe and free from any unsightly germs. That’s not to say you won’t drop it from time to time, but even dropping it with its silicone lid on should help prevent leaks. 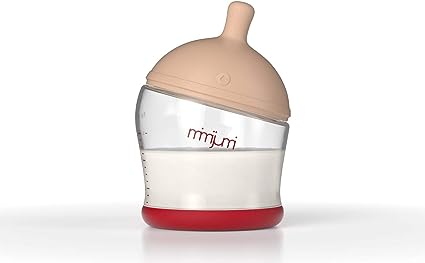 mimijumi Not So Hungry Breastfeeding Baby Bottle
$19.99
Check Price
We earn a commission if you click this link and make a purchase at no additional cost to you.

It’s not short and wide exactly, but the Comotomo Natural Feel Baby Bottle is unique in its own way. The bottle itself is made from a safe and hygienic silicone material, so it’s soft enough for small hands to grip easily while being naturally skid-proof all around.

But like the Nanobébé, its nipple is designed to mimic breastfeeding so that exclusively breastfed babies can transition more easily and in some cases, latch on better. It can also hold up to five ounces of either breast milk or formula, which again, is similar to the capacity of the Nanobébé Bottle. The wide-neck design makes it easy to clean by hand, but if you prefer a dishwasher, it’s also top-rack safe. Or, it can be used in a bottle sterilizer. 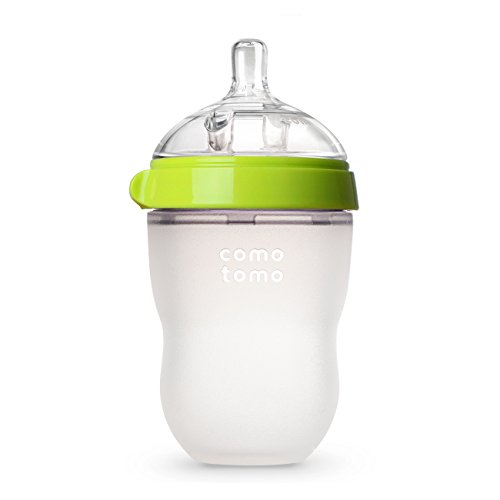 Comotomo Natural Feel Baby Bottle, Green
$12.99
Check Price
We earn a commission if you click this link and make a purchase at no additional cost to you.

The LUX Nature Baby Bottle is another soft silicone bottle that also holds up to five ounces at one time.

There is a hard plastic ring around the nipple, however, so the shape of its base doesn’t perfectly mimic the real thing as some other nipples tend to do. The tip of the nipple is designed to be close to nature to help your baby latch on more easily, and it even has anti-colic and gas vents to improve air escape and prevent your baby from taking in any extra air during feedings.

The bottle is made from the highest food-grade silicone to keep your baby’s milk or formula safe from BPA (BPA-free bottle) and latex, and it comes with a no-drip dust cap (storage cap) to keep the bottle from spilling or leaking when you put it in your diaper bag for on the go feedings. You can also rest easy knowing that if you drop or tip over the bottle, you won’t have to deal with cracks or scratches on the bottle, since it’s silicone and not plastic.

It may not have a short and concave shape or even a silicone body, but the Baby Brezza Natural Bottle  is short and wide to give it an easier to grip shape.

It will not only leave your hand less tired after holding it for a while, but once again, this particular bottle can make it easier for your baby to hold it too. The bottle comes in either five or nine ounces, but the five-ounce bottle should be large enough to accommodate your infant’s needs.

And since it’s not made of plastic, you can enjoy it for even longer, with no scratches made from bottle brushes and less of a chance of damaging it if you drop it.

The wide breast-like nipple makes it easier for your baby to latch and it even has an anti-colic system to help your baby drink milk or formula rather than take in the air, which can make your baby gassy and uncomfortable. It can also be taken apart into just two pieces for easy cleaning. 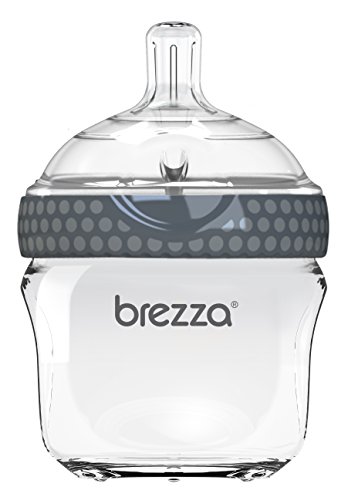 Baby Brezza Two Piece Natural Glass Baby Bottle Check Price
We earn a commission if you click this link and make a purchase at no additional cost to you.

While some bottles are, in their one ways, comparable to the Nanobébé Bottle nothing really beats the real thing. It’s unique and useful for babies who are either bottle or breastfeeders (breastmilk bottle), and it can promote a bottle holding early on.

Plus, the entire thing, and not just the nipple, imitate the real thing, which can make the whole experience that is much easier for babies.

There are indeed positive aspects to using silicone bottles or bottles that simple have larger or wider bases since babies can benefit from the ease of use those offer as well, but the Nanobébé Bottle is unique through and through. Plus, it’s designed to be anti-colic, which is essential in any bottle.

Yes, all babies are different, and they all might have their preferences, so there’s a chance that the Nanobébé Bottle won’t work for them, but it’s certainly worth the try.

Is the Nanobebe Bottle System Worth it?

The short answer is YES. While it depends on many factors specific to your baby, we loved the natural approach, mimicking a human breast PLUS the built-in anti-colic. This is particularly effective for breastfed babies (fully or partially).

Question: Can I use the Nanobebe bottle for pumping milk?

Answer: Yes. The Nanobebe bottle comes in a package with adaptors and it’s perfectly compatible with most breast pumps.

Answer: Yes. The Nanobebe bottle and its additional parts are machine washable but is also easy to clean by hand with a simple brush.

Question: Can I put the Nanobebe bottle in a microwave?

Answer: The Nanobebe bottle is good to go in a microwave, but you can also easily warm the milk in warming bowl and hot water. Also, there is a Nanobebe special bowl for warming up milk which many moms also love since the milk is ready in an instance.

[…] of concept and design. The shape resembles a mother’s breast in a highly authentic manner. The Nanobébé Bottle can hold a maximum of 5 ounces of […]

I was suggested this website by means of my cousin. I'm now not positive whether or not this publish is written by him as nobody else understand such targeted about my trouble. You are amazing! Thank you! anunciosyanuncios.es

Heya i am for the first time here. I came across this board and I find It truly useful & it helped me out much. I hope to give something back and help others like you helped me. forum.bizitalk.com