Sometimes, the cost is the most important factor when looking at two solid jogging strollers. When you look at the  Joovy Zoom 360  vs. the BOB Revolution SE, you may notice that the proven difference is in the hundreds, but there are plenty of other factors to consider overall.

They are both made with lightweight frames that are a lot easier to handle, transport, and push than some other jogger strollers. They both also have easy and compact folding capabilities, which again, is an important factor in any stroller. So when looking at each of those qualities, the Joovy Zoom 360 and BOB Revolution SE may seem similar enough, but if you look a little closer, there are some stark differences as well.

For example, while the BOB has a foot-activated brake that’s easy enough to get to, the full bar brake on the back of the Joovy Zoom is even easier to access each time.

But on the flip side, the Joovy Zoom can’t adjust the shock and suspension system like the BOB Revolution SE does. It would be easy to go back and forth with what each stroller has that the other may be lacking, but to really get a proper look at them both, it’s best to examine them individually first. Because at the end of the day, it’s the Joovy Zoom 360 vs. the BOB Revolution SE.

Right off the bat, you might notice that, unlike other similar joggers, the seat in the Joovy Zoom 360 is a little higher up and even wider. This means that your growing toddler will be able to continue to sit comfortably as they get a little taller and a little bigger.

It also provides ample comfort for your baby overall, once he or she is out of a car seat in the stroller. While the stroller doesn’t come with a tray that goes across the front of it, there are interior mesh pockets for your child’s necessities as well as a parent organizer on the handlebar with two cup holders and a zippered compartment. Underneath, there is a storage basket for your little one’s other needs while you’re out for the day.

When it comes time to fold up the stroller and put it away, you can do so easily. There is a one-handed easy fold system with an auto-lock feature that locks the folded stroller into position. And picking it up to put in your trunk or store away is simple thanks to the lightweight aluminum frame.

When it comes to jogging with the stroller, you’re likely to get a smooth experience each time. It has a shock-absorbing suspension and 16 inch rear air-filled tires that make jogging and walking comfortably for both you and your child.

“One of the best jogging strollers out there. Forget the BOB and Thule. Way overpriced and not as lightweight as this one. This one is super light, great for running or walking over any surface, and has great additional features such as the sunshade that’s big enough or the great storage bin underneath.” – Malika Moretti on Amazon.

“Thank you Joovy for being so much more affordable than the other guys!!! Extremely strong, durable, smooth, and allows my little to see the world. Joovy allows me to run, play and keep up with everyone else. Then I can, fold and pick up the super lite jogger with ease. If the fit is tight for your car, push a simple, quick release lever, and the main wheels slide out.” – Ethan C. Sewell on Amazon.

“This stroller is great! It’s light and narrow. Very smooth and I absolutely love the big canopy. It’s very cool looking as far as strollers go.” – Elliot Ried on Amazon.

“This is a great jogging stroller! It is super easy to handle, so much so, that I can walk the dog with one hand and maneuver the stroller with the other hand. It collapses very easily to stow in the car. It is great looking and has the added feature of two cup holders and a pouch at the handlebar for cell phones, keys, dog treats, etc.” – Tiffany Tolley on Amazon. 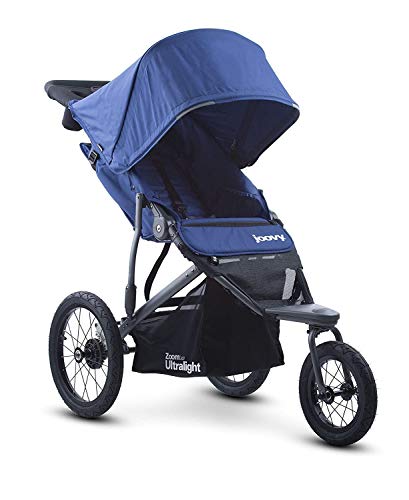 Joovy Zoom 360 Ultralight Jogging Stroller
$289.99
Check Price
We earn a commission if you click this link and make a purchase at no additional cost to you.

Has Joovy Zoom 360 Been Recalled?

By far, there are no complaints about the Joovy Zoom 360, which means it is a safe option to go with. You will not have to worry about your baby’s safety, as there are no reported issue with this model.

Not only is the BOB Revolution SE a jogging stroller to keep your child comfortable for longer periods of time, but it’s also an all-terrain stroller. Thanks in part to the adjustable suspension system that’s made to absorb shocks and bumps in the sidewalk or path, your child can be perfectly content no matter what.

Although it also helps that the seat is well padded and has the ability to recline back in multiple different positions. Together, these aspects of the BOB revolution SE definitely make it a comfortable and versatile jogging stroller for you and your little one.

You can also fold the stroller up in a simple two-step process, and since it has a lightweight frame, it’s relatively easy to take it with you wherever you need to go. And once folded flat, the jogger has a handle you can pull to pick it up and put it in a standing position.

Although flat tires do happen with any stroller, you can take comfort in knowing that the air-filled tires are explicitly designed for all different kinds of terrain. Plus, the front swivel wheel can be locked into place to give your baby or toddler an even smoother ride each time. 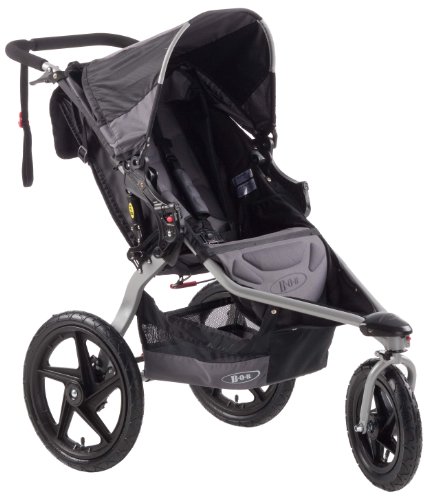 BOB Revolution SE Stroller
$599.99
Check Price
We earn a commission if you click this link and make a purchase at no additional cost to you.

Has Bob Revolution SE Been Recalled?

Over the years, many B.O.B models have been recalled, as there have been a few accidents which luckily were not very serious. As far as the Revolution SE is concerned, there have not been any issues that suggested this product was not safe for use. So, parents, be calm knowing that your kid is in great ‘hands’.

“We’ve had this stroller for almost 15 months now, and it’s hands down worth every penny. The only thing we needed to do 2-3 times is just to adjust the tire pressure (add some air) every few months. The stroller is great for walking or jogging, there’s plenty of room in it, and the material is easy to clean (just wipe it off). Also, the stroller is sturdy and larger wheels make it possible to stroll down the beach or gravel effortlessly.” – Randy Jennings on Amazon.

“This stroller is awesome!! I have been taking my son out for walks on this stroller, but have been using the adapter to connect his car seat to it. It is very smooth, and it goes over bumps very smoothly! The stroller is very easy to maneuver and push, unlike other typical strollers!!!” – Marisol Godinez on Amazon.

“Absolutely love it!! Worth every single penny! It took us a while before we decided to spend the $350 plus, but once I got it and started running with it, I did not regret spending the money. We run at least three miles a day on a trail, and it feels so lightweight!” – Norma Yanez on Amazon.

“I have had my stroller for almost three years now, and it is still the best thing we bought when our little one came along. I love it. My son loves it. it is so easy to push, move around on all terrains (at least all terrains we do in a suburb), and it barely shows any age despite going all over the place with us, in all kinds of weather!” – Nicole M. Anders on Amazon.

When it’s all said and done, the most important thing for a long-lasting and comfortable jogging stroller is that it’s also safe for your child. Both the Joovy Zoom 360 and BOB Revolution SE offer safe rides each and every time.

They’re also designed for children well into and even past the toddler age, so you can’t say that either of them won’t last your family very long. But when it comes right down to it, the Joovy Zoom 360 is going to be the stronger option here. Yes, the BOB Revolution SE offers a smooth ride that will keep your baby or toddler comfortable through bumps. But the Joovy Zoom 360 is nearly half the cost of the BOB.

Since the strollers have virtually similar qualities to them, the cost is the biggest difference. And since the Joovy Zoom 360 is more affordable for most families, it’s the more logical choice between the two strollers.

Whether you choose either of these strollers, you’re going to get a long-lasting and versatile jogger that will take you through multiple terrains and environments. The Joovy Zoom 360  may be the better option here overall, but it’s still hard to ignore all that the BOB Revolution SE offers both you and your little one.