Sometimes, a baby brand is so on point with what parents need that they create a multiple of options for one need, like with the Graco 4Ever and Graco Extend2Fit Car Seats.

Both are designed for essentially the same thing, but, because they’re both made to do the same for your little one, you’ll probably find yourself wondering which is the best.

Main Differences Between Graco 4Ever vs Extend2Fit

The Main Differences Between Graco 4Ever vs Extend2Fit are:

Since this is Graco we’re talking about, you can’t really go wrong either way. However, as with any children’s products, there’s going to be a stronger option between the two. So, before you register for one for your baby shower or invest your own money in one of these Graco options, you’re going to need to consider all that they both offer and all they both lack.

The Graco Extend2Fit, for example, is considerably less costly than the Graco 4Ever and that alone could sway some parents in their decision between the two.

Then again, the Graco 4Ever Car Seat can be used for children up to 120 pounds and can be the only car seat you’ll ever need. And as any parent will tell you, that’s kind of a bargain at almost any price. While both car seats might look virtually the same thing, it’s never that simple with convertible car seats. And because these are from the same brand, you have to expect that they both have their differences to make them their own. 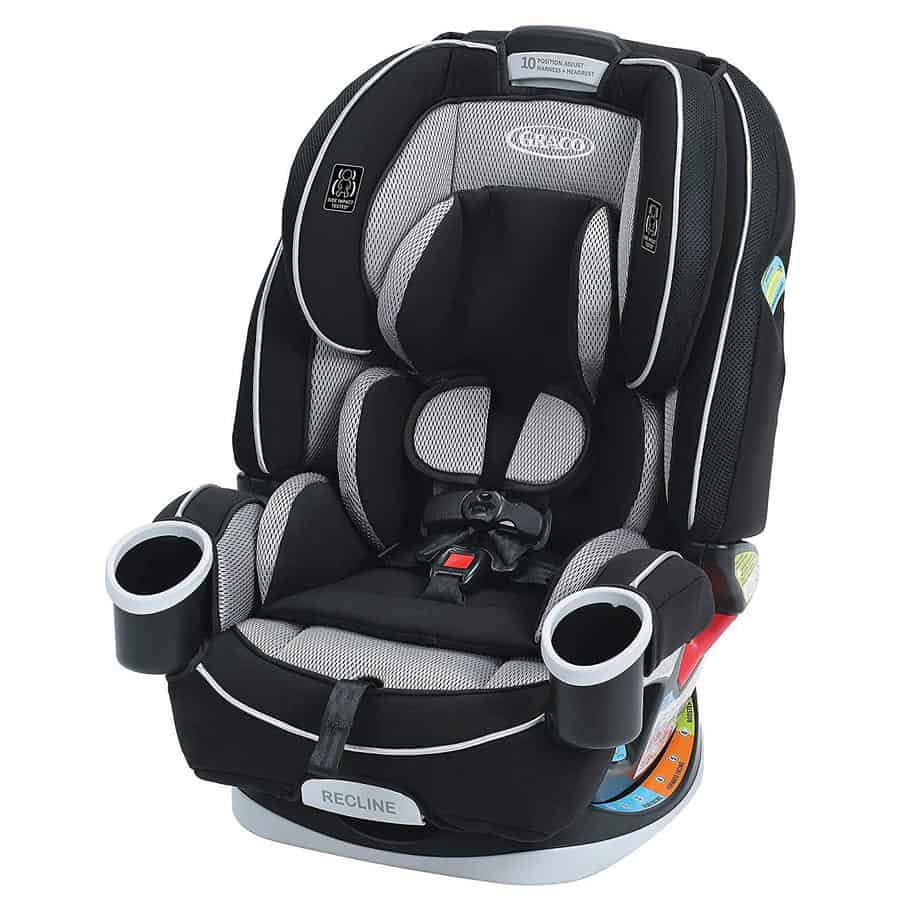 Most parents tend to be big fans of car seats that can last literal years and take your baby from infancy well past the toddler years.

The Graco 4Ever Car Seat does just that, which can take a lot of stress off parents since they won’t need to keep buying new car seats as their child grows. In fact, the car seat is advertised as one that will give you as many as 10 years of use before your child has officially grown out of it.

Most of the ways it grows with your child stem from the many different adjustments that can be made as your child grows. These include a six-position recline and 10 position headrest, just for starters. There are also removable head cushions that can keep your baby safe and comfortably supported when they’re small and taken out to allow your child more room as he or she gets bigger.

It also has the Graco Simply Safe Adjust Harness System to make adjusting the car seat as easy as possible any time. Since it transitions from a rear-facing car seat to forward-facing, there’s a bubble level indicator to help you get it at just the right angle when rear-facing. That alone is something you don’t always find on a car seat that transitions from rear to forward-facing car seat.

The biggest and best selling point, however, is going to be the fact that it can be used from the time your baby is born until the age and weight they no longer need any car seat or backless booster seat at all.

“Other than the fact that every little water spot shows on these (gray and black), I cannot find fault with this car seat! I bought to one for each of my children, and they are easy to adjust, easy to wipe clean, once they are installed they hardly wiggle around at all, and I love the fact that my son’s booster seat uses the latch system! It makes me feel so much better with that extra stability (compared to a regular booster seat that just sits upon the seat and relies on the on the lap/shoulder belt).” – Mikayla Pillig on Amazon.

“I love this seat so much, that we’ve purchased three of them. My son falls asleep in the car, every time I put him in this seat, which he never did before. It’s hard to install with the new Latch, but be patient, it isn’t impossible, it just takes some muscle. I’m also happy that I won’t need to run out and buy a booster seat in the future.” – Elizabeth M. on Amazon.

“This car seat is amazing. Big, durable and has lots of seat pad so your little one is comfortable, but is heavy and sturdy enough to ensure safety. The car seat is easily installed and takes up on of the passenger seats in the back… The fact that it converts and can last for many years due to the weight and height allowances, it is absolutely worth the investment. We bought one and just purchased a second for our other car.” – Jessica Dioguardi on Amazon. 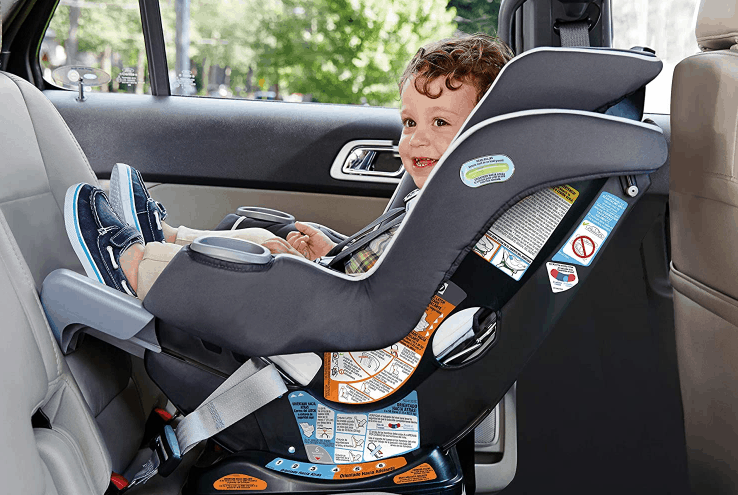 The Graco Extend2Fit Car Seat is another convertible option from the Graco brand. Unlike the Graco 4Ever, it can only be used for children up to 65 pounds. Be that as it may, it does offer longer rear-facing capabilities for longer than some other similar convertible car seats.

However, you can indeed use the car seat from the time your little one is born. You may eventually have to transition to a booster car seat. But, until then, the Graco 4Ever is a suitable option for going from infant car seat to toddler car seat.

One of the things that set the car seat apart from others, though, is the extension panel that adds up to five additional inches of legroom. This is part of what makes it possible to keep your child in the rear-facing position for longer since it supports little ones’ feet as they grow.

It also has a six-position recline to keep your little one safe and comfortable at the same time. Plus, the 10 positions adjustable headrest will continue to support your child as they grow.

To install the car seat, you can use the simple one-handed Latch connectors system, which makes it a little easier to move the car seat from one car to another. Of course like the Graco Extend2Fit, this one can’t be clicked into place in a Graco stroller, but it’s still a solid option for any growing baby or toddler.

“We purchased this seat for our ever-growing 16 months old upon recommendation from many mom groups. We were a little worried about it fitting into our two-door 2009 Honda Civic but needn’t of! It is compact, sturdy, and installs in minutes with room to spare. Our toddler loves it and is comfortable with room to grow and then some. We plan to keep her rear-facing until she maxes out the seat height/weight limits and couldn’t be happier. Highly recommend to others!” – Mitchel Cacciola on Amazon.

“This car seat is perfect. Easy to install, love the many recline options, the fabric is easy to clean and high quality. Two cup holders are a nice feature. The extended foot space has been vital for our 95th percentile toddler – she’s not crammed in her rear-facing position. Lots of people say in their reviews that they struggle with their kids’ neck being in an awkward position, but we removed the infant padding and our kid fits perfectly.” – Kimberly Vannorman on Amazon.

“Excellent so far. My 24.5 pound, 29-inch nine-month-old fits comfortably in this. It fits great in the middle back seat of my 2011 Subaru Forester. I can lean both front seats back pretty far without interfering with the seat. Easy to take in and out of the car also. Love the 50-pound rear-facing weight limit especially since he’s at the 98 percentile right now and we have a long way to go rear-facing. The extension for the legs will be great too!” – Sara Manske on Amazon.

The Verdict: Graco 4Ever or Extend2Fit

If your main goal is to find a convertible car seat your baby can use into toddlerhood, then both car seats are solid options.

But, when it’s all said and done, the stronger option would have to be the Graco 4Ever Car Seat. Not only does it offer premium longevity and comfort, but, it also has top safety features to keep your little one comfortable and safe as they grow.

FAQ’s About Graco Extend2Fit vs Graco 4Ever

Does the Graco Extend2Fit turn into a booster?

Yes. The Graco Extend2Fit will definitely save you time and money searching for a booster seat because it can convert itself into one, once your baby grows.

Yes. The Graco Exted2Fit is FAA-approved and you can use it to travel and secure your baby, but only if it’s used in harness mode. Booster seats are not allowed in planes due to the lack of safety.

Can I combine the Graco 4Ever seat in a stroller?

Unfortunately, unlike some car seats that can also be used on stroller bases, the Graco 4Ever simply cannot be used in this way, and it’s only made to protect your child in your vehicle.

Final Thoughts on the Extend2Fit vs 4Ever Battle

You don’t necessarily have to go with a convertible car seat. But, it’s always the more logical option compared to a standard infant seat. It will last your little one much longer and be a better value for you in the long run.

Either the Graco 4Ever the Graco Extend2 Fit are top choices as far as convenience goes. And, you’ll only have to deal with one or two car seats ever. When it comes to installation and moving a car seat between vehicles, that’s the biggest win of all.