Diono might not be one of the most popular car seat brands out there. Nevertheless, it is known for its high-quality car seats for children of all ages and sizes. For example, the Diono Radian 3RXT and Diono Rainier 2AX.

They are two prime examples of what the brand offers regarding car seats that can grow with your little one. At first, they both might look like the same car seat without any real differences. However, some qualities set them apart from one another. Like the fact that the Radian is for children up to 120 pounds.

On the others side, the Rainier is made for kids as big as 65 pounds. Somehow, though, they’re both the same price on Amazon. This means that you might have to find other differences between them to really help you decide which is best for your family.

Both car seats are designed to be slim and fit in most cars, but you can likely fit as many as three Radian Car Seats in your backseat. The Rainier has the ability to be in the rear-facing position for kids up to 50 pounds. However, while the Diono Radian RXT Convertible has to be switched to forward-facing when they reach 45 pounds, it’s a small difference, but for some parents, it can be a big deal.

They both have infant insert pillows and memory foam (EPS foam) infant body support cushion to make the car seats as comfortable as possible for children right from the start. They are equipped with Diono’s SuperLatch system (harness mode and latch system) that lets out an audible click to let you know you’ve installed the car seat properly.

At first glance, both car seats are certainly similar enough, but they do have enough small differences to eventually make the decision of choosing between them just a little bit easier.

Bottom Line Up Front: Both are quality car seats, but our pick here is definitely the longer laster Diono Radian RXT here. It’s rated up to 120 lbs (unlike 65 lbs for the Rainier), meaning you won’t have to worry about getting a new car seat if your toddler outgrows it in the forward-facing position.

Main Differences Between the Diono Radian vs Rainier

The Main Differences Between the Diono Radian and Rainier are: 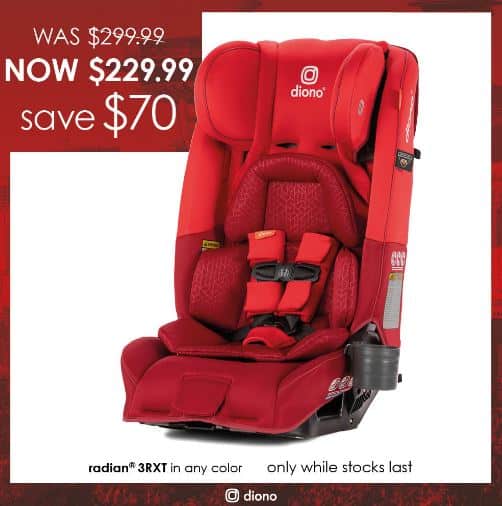 You can tell just by looking at the Diono Radian 3RXT that it’s designed to have a slim frame and fit multiple in most back seats with ease.

And although it looks like a car seat that’s meant for older babies and toddlers only, it actually starts out as a rear-facing car seat for children up to 45 pounds, keeping them in the rear-facing position for longer than some other similar car seats. Once they transition to forward-facing, you can continue to get value out of the car seat until they’re 120 pounds. Let that sink in for a minute.

This Radian RXT (Diono 3RXT) convertible car seat, the newest of its style, is designed to fit children from birth all the way up to the point where they no longer need a car seat, let alone a booster car seat. It’s a total win-win any way you look at it.

For your child’s safety, it’s made with a dual spine to withstand force and a high strength steel frame. It also has superior side impact protection with aluminum reinforcement added to give you even more peace of mind.

As an added bonus, the car seat actually folds down flat so you can travel with it and it’s approved for use in aircraft in case you need to use it for your little one on a flight. Needless to say, it definitely has you covered as far as longevity, convenience, and safety go.

Pros of the Radian 3R

Cons of the Radian 3RXT

“You can’t beat these car seats. We have used these since birth with our triplets (two years old now), and since our oldest was 18 months (she’s five now). They are easy to remove, easy to clean, and hefty enough to stay put during an install. They are comfortable and cool down quickly.

I love that they are narrow — no unnecessary molded plastic that takes up space if you need to have more in a row than one car seat. We use these three across rear-facing in the third row of our Sienna, and have installed them as rear-facing and forward-facing in the captain’s chairs, with space left for an adult to sit next to them.” – Kathryn Marcotte on Amazon.

“This is our second Diono. My toddler has one and seems very happy and comfy in it so we said we would get the same for our son. He is happy out in it too and sleeps no problem. Seems very secure. Would recommend.” – Ciaran Dermody on Amazon. 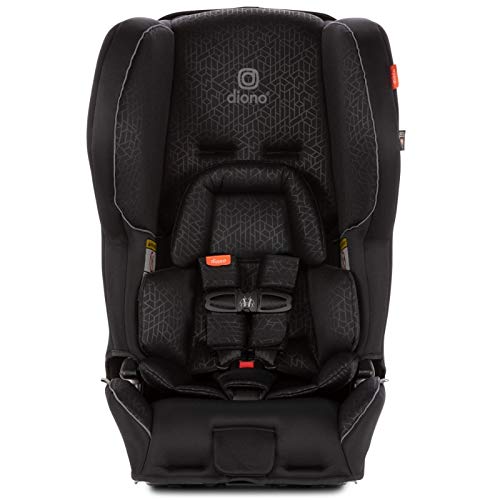 The Diono Rainier 2AX, which is the newest Rainier on the market right now, isn’t unlike the Radian. It looks similar enough in design and has many of the same comfort and safety features, but it is made for children up to 65 pounds rather than 120 pounds.

While that’s a major difference, and once that may deter some parents, other qualities make the Rainier 2AX a solid option on its own. It does keep your little one in the rear-facing position longer than the Radian, up to 50 pounds, which is a big plus.

The Rainier 2AX is made from high-strength steel with a dual spine that redirects energy from impact and helps to keep your child safe in the event of an accident. It also has energy-absorbing foam added for side impact protection, as well as extra wide and deep side walls to keep your little one comfortable.

No matter your little one’s size, the walls and cushions are designed to hug them in all the right spots and keep them safe and comfortable at the same time.

Like the Radian, it can fold flat for easier travel when necessary. It might be on the heavier side and difficult to lug around in that respect, but since it is airplane friendly and the fact that it folds flat makes it a little less awkward to carry.

“After so much research on car seats, I decided to get two Diono Rainiers for my twins. I have a Yukon, so fitting two in the back seat shouldn’t be an issue. There are more steps to install than other car seats, but if you follow the instructions, it was not hard to do. Diono also has good instruction videos on their YouTube channel to help you install… if you want a heavy-duty seat that fits nicely in a larger back seat, is comfortable, and feels very safe, I’d definitely recommend Diono.” – Julienne V. on Amazon.

“I love that seat will grow with my children and has a steel frame. I have long skinny children so I want a seat that allows me to keep my children restrained in a five-point harness longer. My husband and I did extensive research and decided to purchase a Diono Rainier seat in the plum color. I am beyond pleased with this seat.” – Momma of 2 on Diono.com.

There are certainly some benefits to both the Diono Radian 3RXT and the Diono Rainier AX.

They’re both solid options for any growing child. But, when it comes down to it, the smarter option here would be to go with the Diono Radian 3RXT. Not only can you fit three across the backseat of most cards, but the car seat itself can be used for children up to 120 pounds.

That’s a pretty huge difference from the Rainier AX, which caps out at 65 pounds. Especially since both car seats are around the same price and offer many of the same qualities otherwise. Overall, however, you can’t really beat the longevity and usefulness that the Radian RXT provides, no matter how solid the other car seat is too.

Final Thoughts on the Diono Rainer vs Radian Debate

When you have two car seats from the same brand with similar qualities and price tags, it can be a daunting task to choose between the Diono Radian vs Rainier car seat. You really have to look at them from all angles to understand all of their benefits and what either of them might be lacking.

Bottom Line: In this case, a few big differences are all it takes to make the Radian 3RXT the stronger option when compared to the Rainier 2AX. However, in the end, it’s easy to see that both Diono seats are solid options. 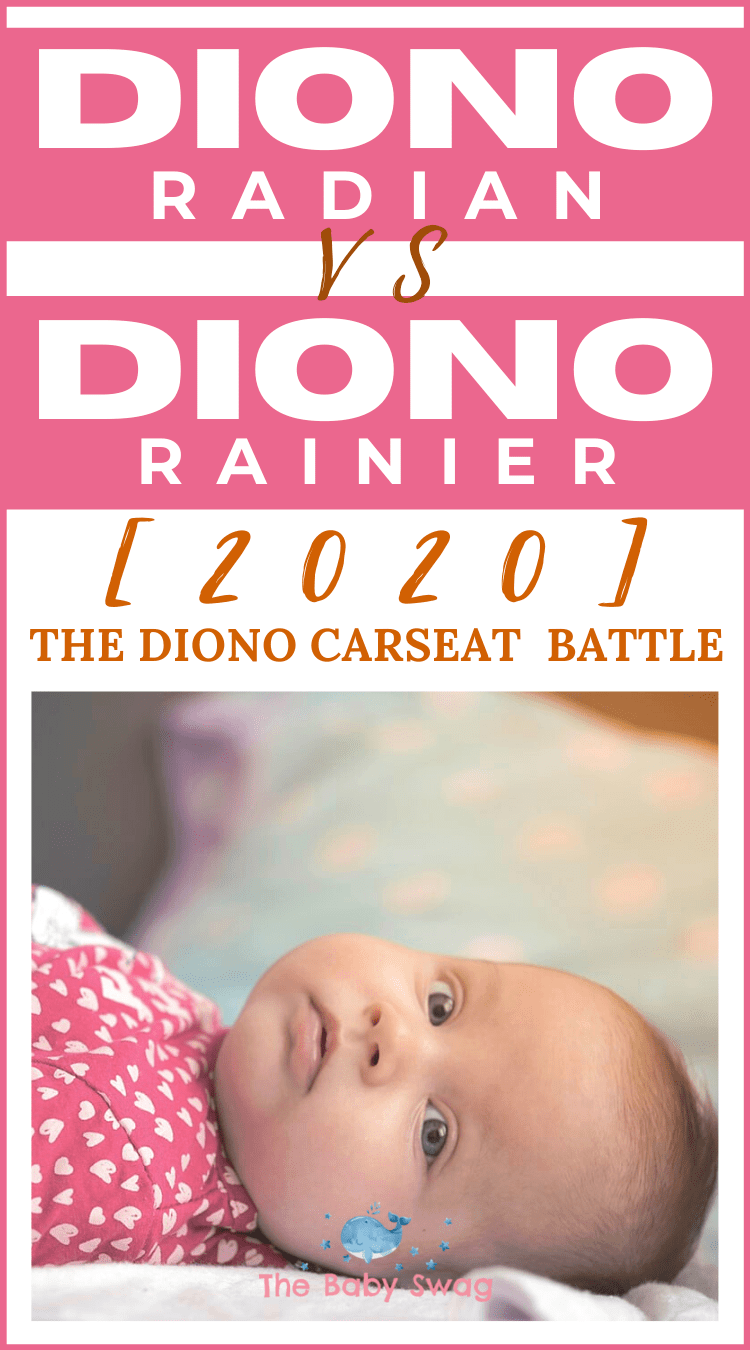