In general, a Diaper Genie is a baby shower staple. Only now there’s more than one to contend with, so it’s only natural to compare the Diaper Genie Complete vs the Diaper Genie Expressions to weigh your options and figure out which one is best for your family for the long haul.

Because yes, diapers are part of the long haul of raising a baby and toddler, since your little one will be wearing them for at least a couple of years before potty training is finished. Since both the Diaper Genie Complete and the Diaper Genie Expressions are designed in a very similar way, most of the functions and features are identical, but there are going to be some stark differences to make the decision a little easier for you.

Like the odor-controlling filter built into the inside of the lid on the Diaper Genie Complete, or the dual secure odor lock system that the Diaper Genie Expressions is made with, making each able to prevent odors from escaping, but in different ways.

Both products are quite similar, so it might be harder than ever to compare them, but when looking closely at the Diaper Genie Complete vs. the Diaper Genie Expressions, it should be fairly easy to determine which is the better option.

One of the most important things about the Diaper Genie Complete is its odor lock capabilities. Thanks to its built-in Odor Controlling Antimicrobial and clamps in place, there’s little to no chance of the smell of dirty diapers escaping through the barrier anytime soon.

It also comes equipped with a Carbon Filter on the inside of the lid, which is meant to absorb any smells that escape through the top and also let out a fragrance to keep your baby’s nursery smelling sweet despite having a bin full of soiled diapers in the corner.

Like other Diaper Genies, it also has a foot pedal for easy opening, but when it comes time to cinch off the bag and tie it to throw it away, the front of the Genie tilts open so you can do it all in one or two easy moves. And instead of your standard white, which can be boring in a fun nursery or show stains or markings a lot easier, the Diaper Genie Complete also comes in gray, green, blue, and pink.

The miracle blanket is the secret to a happy, well-rested baby, as well as a well-rested mom and dad. It has been proven to extend sleep periods between feedings by preventing night movement and separation anxiety; thus allowing mom and dad a greater duration for sleep.

“Don’t hesitate after reading reviews- buy this! We had the older diaper genie for our now three-year-old, and due to the horrible smell every time we would open it, we decided to try this one… after three months of use, I can honestly say I love this one!” – Brooke Joseph on Amazon.

“This works! I had the old model with my firstborn, and it did its job. The Poo smell was there but minimal. This second baby has to be on specialty formula and his poop stinks! The old one broke, so we just got this one, and his room/our house doesn’t stink anymore more. It also has a smooth open and closes, unlike the older model that snapped shut.” – Sarah Waltrip on Amazon.

“So easy to change filters and empty the dirty diapers. I have been using it for two weeks and haven’t smelled a single dirty diaper, even when I open it to put another dirty diaper in it.” – Kelsey Eleanore on Amazon.

The Diaper Genie Expressions diaper pail was actually a finalist for the Baby Center Moms’ Picks, and for good reason. Or, that is, for good reasons.

It comes in the standard white plastic design, but you can buy multiple fitted “sleeves” that will not only transform the diaper pail but also make it easier to match your child’s nursery. Plus, if something spills on it or a diaper opens and makes a mess on the sleeve, you can take it off to wash or replace it with ease.

But it also has a Push-n-Lock clamp on the inside of the top to help seal in odors and keep them from escaping even when you need to open it to put another soiled diaper inside.

Unlike the Diaper Genie Complete, it doesn’t have a convenient foot pedal, but it still has an easy-to-use opening. All you have to do is press the top, and the pail will open for you to dispose of diapers. Plus, since it will hold up to 50 soiled diapers, it means less changing of the liner, so less work on your part. 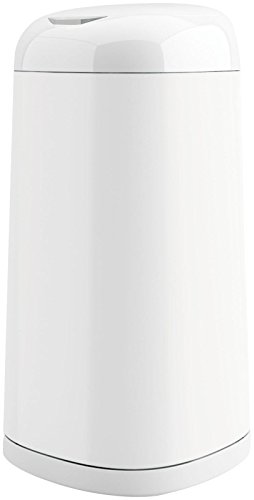 Playtex Diaper Genie Expressions Customizable Diaper Pail
$27.99
Check Price
We earn a commission if you click this link and make a purchase at no additional cost to you.

“This will dress up your boring diaper genie. Makes it much less of an eyesore in your home. Made like a pillowcase that you just slip on over the pail and can easily be removed and cleaned.” – Rebecca Fuller on Amazon.

“I have had two other styles of Diaper Genies and this is by far is my favorite it may look small but holds the same amount of diapers, it holds the smell in very well and to open it to change the bag is the easiest of all three types I have had.” – Candra Marshall on Amazon.

“There is a noticeable smell difference between diaper genie disposed of diapers and regular garbage disposed diapers. I love that you can customize this genie. I live in an apartment building where running to the outdoor garbage can is not an option. The dumpster is a long haul and not feasible for every poopy diaper (infant and toddler in tow). I’m enjoying the Diaper Genie! I highly recommend this as an alternative to a poopy-smelling home.” – Lisa Smith on Amazon.

Since both diaper pails are from the Diaper Genie brand, it’s easy to confuse them and even easier to be torn between which one is best for your family’s needs. But when it comes down to it, the Diaper Genie Expressions is the stronger option between the two.

For the dirty diaper capacity alone, the Expressions can hold more at once, which means less times emptying it per week and less stress on new parents. Not only that, but the Diaper Genie Complete is $45 on Amazon, while the Expressions is nearly half that, and for the odor guard features and ease of use, the value definitely checks out.

Of course, the cost isn’t everything, but the Diaper Genie Expressions also has the push-n-lock clamp to deal in odors and to lessen any possible smell from escaping every time you open it back up to put another soiled diaper in it. And since the smell is a big factor in getting rid of dirty diapers in general, it’s definitely important to have as many odor blockers as possible.

Any way you look at it, you’ll need a Diaper Genie of some kind, whether you’re a new or more experienced parent. Disposing of soiled diapers in the bathroom or kitchen garbage can stink up your home rather quickly and force you to dispose of garbage outside more often than not.

With a Diaper Genie, or more specifically the Expressions one, you can dispose of diapers quickly and easily and you won’t have to take the fullback out to the trash until you’ve filled it completely with up to 50 dirty diapers. There’s really no getting around investing in a Diaper Genie, so at the very least, you should have a better idea of which one is a more valuable and long-lasting option.