Sometimes, choosing a car seat for your baby is about more than finding a cutesy pattern or a print that showcases their favorite cartoon characters. Mostly because let’s be real – they don’t have a favorite anything at this point, and also because sometimes it’s nice to have baby accessories that are sleek, simple, and to the point.

The Cybex Aton Q Review is all about a car seat that provides the kind of safety for your infant that will make you feel more than at ease, especially if you’re a new parent who is so sure that you aren’t tightening the straps enough. Or too much. It’s always something – trust me, I get that.

The Cybex Aton Q is also super lightweight, which can be a Godsend if you’re carrying around a particularly chubby baby in the carrier car seat.

Don’t get me wrong – chubby babies are kind of the best, but lugging them around in car seat carriers can be a horror on your forearms if the carrier car seat itself is heavy. Since the Cybex Aton Q Car Seat is just nine pounds on its own, you’re not looking at too much extra weight in addition to your baby as he or she grows.

For some, car seats are just that and they prefer to leave it nestled in the car and take the baby out as opposed to carrying around the car seat, but as any parent will tell you, waking a sleeping lion, er, baby, is never a good idea. So let’s go over the Cybex Aton Q Car Seat Review to find out what can do for you and your baby.

What It Says It Does

The biggest selling point for the Cybex Aton Q is that it features what they call the Aton Linear Side Impact Protection System, which uses a shell that, while flexible, absorbs impact.

In addition to this protection, the car seat also has energy-absorbing foam protection built-in which would give any parent peace of mind. It’s also big on being able to be installed in cars with or without the base, which can make for easier travel and switching the car seat between you and your partner’s cars, as needed. Dealing with installing and uninstalling a car seat base is legitimately one of the most annoying things about baby gear, so no thank you.

It is also said to come with an extra-large canopy that provides up to UV50 protection from harmful rays. Have you ever used the standard canopy attachment on a car seat? It’s basically there for decoration since it shields next to nothing on your baby.

What It Actually Does

Although the canopy is bigger than that of your average car seat, it’s still not big enough and also tends to detach easily and as a result, becomes a lot more trouble than help when trying to shield your baby from the sun.

It does keep your baby snug and safe, and the lightweight claims are totally legit, but the material on the outside of the car seat tends to be subject to scuffs a lot easier than some others.

In-person, the sleek design of the Cybex Aton Q Car Seat is plenty apparent and when you’re strapped for a room in your sedan, it’s kind of the perfect car seat to be able to fit in the back seat with another one, without feeling like they’re on top of each other. It’s also easy to install and the option to use or not use a base makes it that much easier and convenient.

It has a sleek design

The simple black color throughout the car seat makes it one that is both unisex and parent-friendly. You won’t be driven crazy with the too cheerful images of cartoon bears staring back at you, and if you’d rather not cart around a pink frilly car seat, this one makes it so you don’t have to.

If you choose not to use a base, you can use the LATCH belt system in your car or the seatbelt installation option that keeps the car seat snug and safe in your backseat. If you opt to use the base, though, that’s a whole other story.

The Shock absorption is a huge plus

Not only does it give you peace of mind as a parent, but knowing that there is extra shock absorption installed in your baby’s car seat means that if your golden retriever happens to bump into the car seat out of excitement while you’re putting away your groceries, the baby will likely be just fine.

It’s light enough to carry around

The whole nine pounds thing is something I really can’t get over, to be honest. A car seat that weighs less than your baby is hard to come by.

Instead of resorting to spot cleaning for fear of not being able to replace the padding of your baby’s car seat, the Cybex Aton Q’s is easily washable in the washing machine and can be dried quickly.

The price is decent for what you get

If your budget for a car seat is around $200 and you have no problem spending that much, then the Cybex Aton Q will likely give you what you expect out of a car seat, as far as protection goes. Of course, you can always check out the latest prices and discounts here!

Like the Cybex Aton Q Car Seat, the Maxi-Cosi Mico AP Infant Car Seat provides a special kind of impact protection. In this case, it’s the Air Protect superior side impact protection. It also has an extended canopy with a pull-out extender for extra protection from the sun.

Now, the Cybex Aton Q’s supposedly extra-large canopy isn’t all it’s cracked up to be, but both of the car seats claim larger canopies than normal.

The Maxi-Cosi Mico AP Infant Car Seat also has easily removable pads and fabric to wash and then reattach without much of an issue. The Cybex Aton Q also has easily washed fabric, which you’ll need for those ground-up cereal crumbs and splotches of chocolate milk that make your car smell amazing (read: terrible) on a hot summer day. 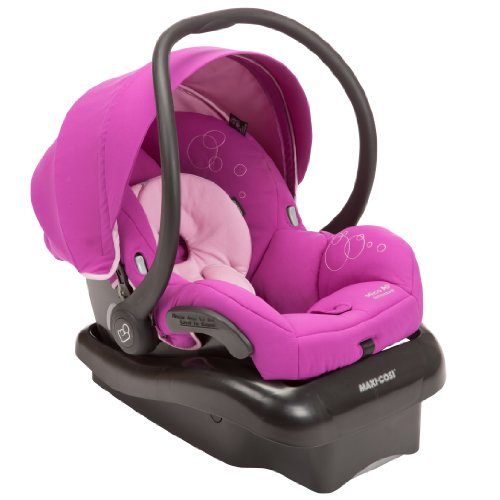 2014 Maxi-Cosi Mico AP Infant Car Seat Check Price
We earn a commission if you click this link and make a purchase at no additional cost to you.

The biggest aspect that the Britax B-Safe 35 Infant Car Seat offers its SafeCell technology that provides impact protection in the base of the car seat, the sides, and even within the steel frame throughout the car seat. Basically, if it had a middle name, safety would be it.

It’s significantly heavier than the Cybex Aton Q, but that’s probably because of its main point to provide more safety for your baby, and all of that padding and shock-proof material adds up.

Still, the safety is more than enough to put you at ease, just like the Cybex Aton Q’s claims of having the kind of impact protection technology to keep your baby safe in the event of a bumpy ride or a car crash. 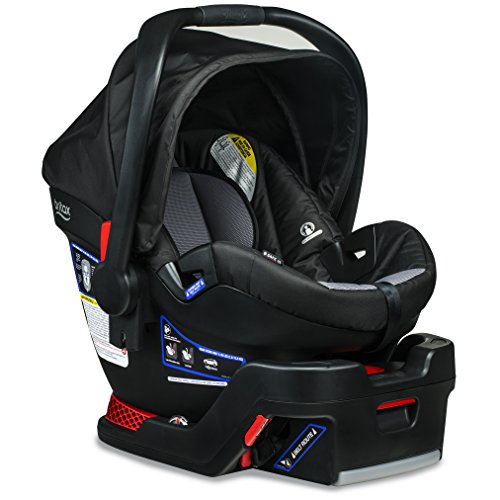 Both B-Safe 35 and Elite are great options but we have given the B-Safe 35 a slight edge because it's the budget friendlier option of the two and you might end up paying more than you should for the Elite Car Seat for the equal safety, protection, and comfort levels.

Sometimes, just because something costs a whole lot of money, it doesn’t mean that it is necessarily worth every dollar spent. Now, the Cybex Aton Q Car Seat isn’t super expensive, at around $199, but it’s also a lot more than your average Walmart car seat that might very well do the same job for you.

It’s hard to ignore all of the little nuisances with the Cybex that add up to what could be continued problems in the long run.

Would I buy the Cybex Car Seat for my second child? Given its sleek and simple design, as well as the fact that it’s lightweight enough to carry it around without feeling like a weeble-wobble, I might be persuaded to, but it also might not be my first choice.

Britax B Safe 35 vs Elite - Which Infant Car Seat is Better? - The Baby Swag

[…] Cybex Aton Q is a good option that is compatible with a lot of popular strollers, including the Baby Jogger City […]

[…] Car seats are one of the most important bits of equipment you’ll ever have to buy your child. Nuna Pipa and UPPAbaby Mesa are two of the most popular child car seats on the market right now. Both brands offer a comfortable, reliable and safe seat that you can use in pretty much any car.  […]