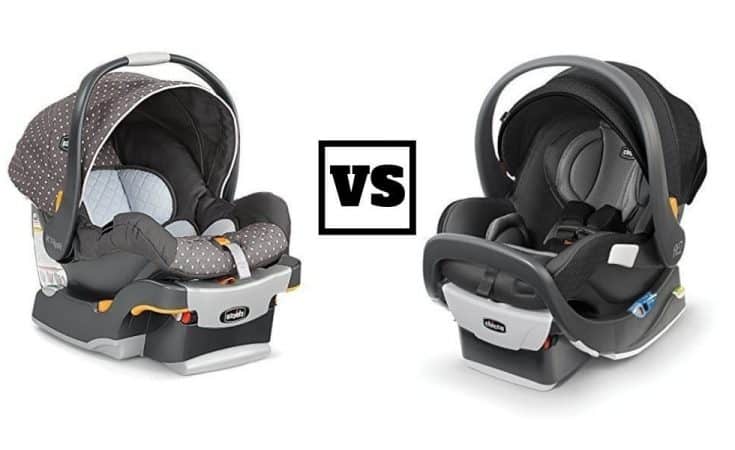 Chicco is definitely one of the top brands where infant car seats are concerned, so if you find yourself comparing two of the brand’s major car seats, you aren’t alone.

But trying to figure out the main differences between the Chicco KeyFit 30 vs. the Chicco Fit2, is not as easy as choosing the most affordable one.

They might seem quite similar at first glance, but when you look a little deeper, there are some big differences that set them both apart from one another. The Fit2 is indeed more costly than the KeyFit 30, but there is more to both of these car seats than a difference in price. 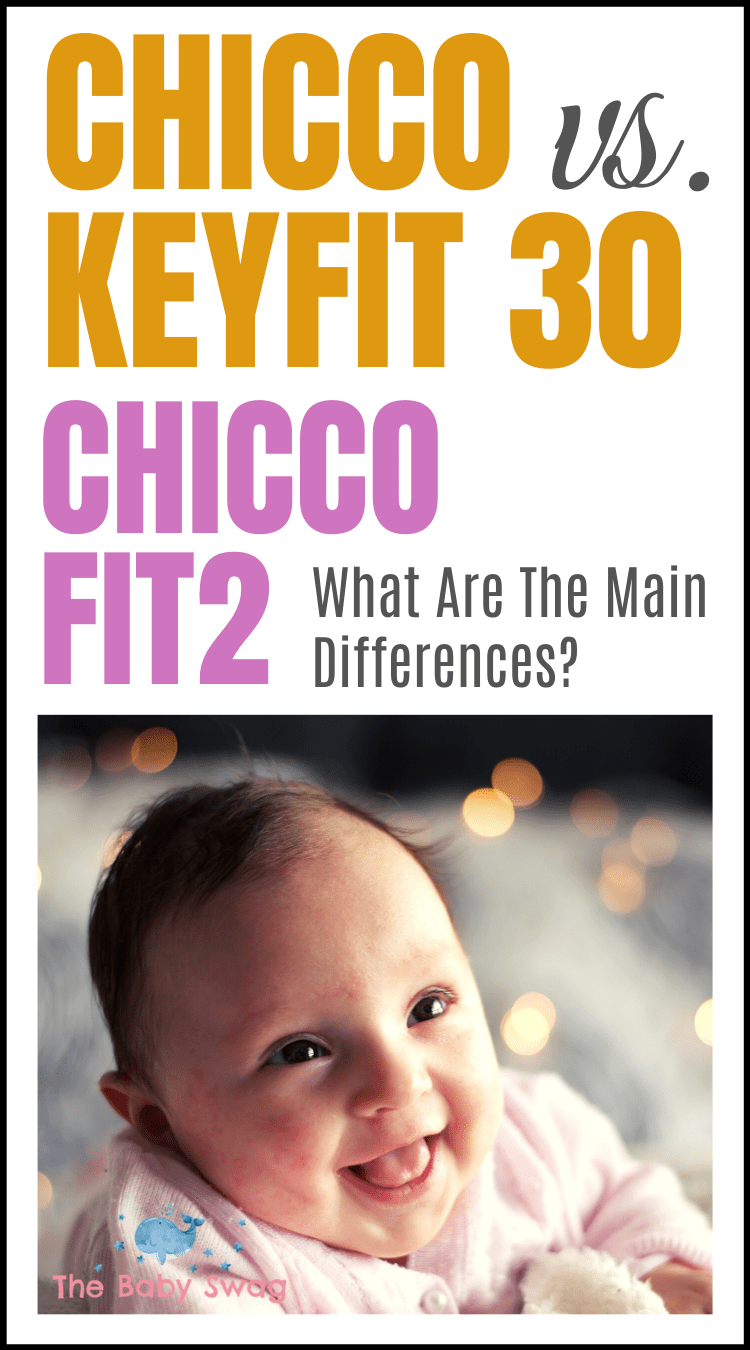 The Main Differences Between the Chicco KeyFit 30 and Chicco Fit2 are:

On the other hand, you can KeyFit 30 has washable fabric, while you need to wipe clean the fabric of the Fit2 to get it clean every time. However, they are both certified for airplane use, which is always a benefit, especially for families who may need to travel with their infants.

The Chicco Keyfit 30 and Chicco Fit2 are both solid car seats that can be used until your baby is ready to transition to the next car seat option. But because they have so many similarities, you might find yourself wondering how they are different and which one to go with. So before you make any rash decisions, it’s important to take a closer look at both car seats.

The Chicco KeyFit 30 Car Seat is one of the top infant seats out there because of its size, safety, and comfort. It’s designed for infants right from the start, but it can only be used as a rear-facing car seat, so you will eventually need to transition to other car seats to accommodate your little one as they enter the toddler stage. It has a five-point safety harness that can be adjusted with one hand and there are bubble levels to help you get the car seat in the base at just the right angle for your baby’s comfort and safety.

Installing the car seat is relatively easy thanks to Chicco’s SuperCinch LATCH tightener. It’s just a tad easier than the installation of other similar car seats, so it can make the KeyFit 30 a little more approachable in that regard. The base then stays in your car so all you have to do is click the car seat in and out as you need to take it in and out of your car. And thanks to the convenient carrying handle, it’s relatively simple to carry the car seat wherever you need to go with your little one. The car seat also clicks into compatible Chicco strollers, so you can easily take your infant on walks without taking him or her out of the car seat.

“We have a Subaru Hatchback Impreza, and I was a little worried if our seats would be to small… nope! Fits perfectly. Bubble indicators are useful, and my son feels very snuggled in the newborn positioner. I feel very at ease with my son in this car seat! Plus, the manual is very easy to read and understand. Three different ways to install seat. Airline approved!” – Erica A. on Amazon.

“I’m on baby number five, so I’d like to think I know what I’m talking about… I’ve had Chicco, I’ve had Graco… and hands down Chicco wins. Love the base and how easy it is to get in and out of the car, the fabric is thick and comfortable, yet easy to remove and reassemble, making for efficient cleaning! Worth the money!” – Emileigh R. on Amazon.

“We love this car seat. We had originally gotten a Britax B-Safe 35, but it was too narrow for our son. He now seems much more comfortable in this seat. It’s very easy to install, has great safety ratings, and another perk is when adjusting the handlebar, it is not a loud click when it locks into place. Helpful for those light sleepers.” – Jaimie Appel on Amazon.

“Love this car seat! So easy and convenient to get in and out of the car. The material is nice and not plastic-like. My baby loves it as well, which is really important. I can tell she feels really comfortable in it. Will definitely buy again for my second baby.” – Gabrielle Sarver on Amazon. 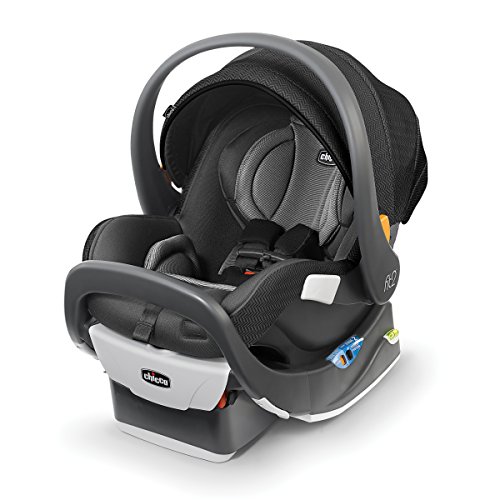 The Chicco Fit2 Car Seat is comparable to the KeyFit 30 in design since it too is an infant car seat that can also be used as a carrier, But unlike the KeyFit 30, the Fit2 is eventually used as a forward-facing car seat to accommodate your baby as he or she grows. Like other Chicco car seats, it also has the SuperCinch LATCH tightener to properly and securely install the car seat base to then click the car seat into each time you put it in your back seat. It has a seven-position headrest to grow with your little one, at least until they grow out of the infant car seat.

Thanks to the fact that it can be used for babies up to 35 pounds and transitions to a forward-facing car seat, your baby can get more use out of this car seat than some other similar infant car seats. The base can be used whether you have the car seat in the infant rear-facing position or toddler forward-facing and can be adjusted with one easy motion to make the base ready for the transition of forward-facing. Speaking of getting the car seat installed correctly, this one has bubble level indicators to get it at just the right angle every time. It’s not exactly a convertible car seat, but it does take the infant car seat one step further than a lot of others. 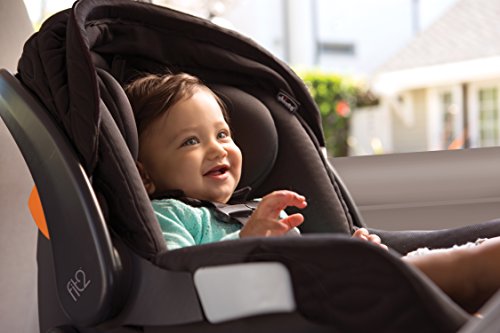 “This is my favorite car seat so far! His main traveling car seat weighs less and that’s why I use it but it has its cons… This car seat weighs more but will grow with him as a toddler later on. He just seems more comfortable comfortable in it! It is well made with good fabric.” – Shawn Sweeney on Amazon.

“Our daughter is now almost four weeks old, she instantly falls asleep when we put her in this car seat whenever we want to drive out somewhere. It is extremely well made with high quality materials and very generously padded, in fact, the best cushioned seat we could find in the market. It has an easily adjustable (one handed) handle that comes in handy when carrying the baby. It is also very stylish and eye catching, we also bought the Bravo stroller and this works fantastic with it, we simply removed the seat that was on the Bravo and our Fit2 snapped right in.” – Hamza Mustafa on Amazon.

“We absolutely love this car seat. Our three month old has gone on 12 hour road trip and an eight hour road trip in it plus day to day travel. She seemed comfy the whole time and didn’t have any uncomfortable red marks after. The shoulder pads are really nice to keep the seat belt straps from hurting her neck as we tighten and loosen them.” – K. Laurin on Amazon.

“Can’t recommend this seat enough. After five months of wrestling with a Maxi Cosi Capsule, this seat is a dream to install and use. Best of all, the baby seems much happier in this seat. Win win!” – Becky Bowman on Amazon.

It might be hard to figure out which car seat is best for your little one at first glance. To be fair, they do have so many of the same qualities and being from the same brand doesn’t help distinguish them either. But when it all comes down to it, the stronger option of the two has to be the Chicco KeyFit 30. It might not be designed for children as big as those who can use the Chicco Fit2, but it is more lightweight and it can still be used as a reliable infant car seat right from the start.

Since it is an infant car seat, you can also easily carry it by the convenient handle and because it weighs less than 18 pounds on its own, most parents will find it easy to carry and transport it. Not to mention the fact that it’s more affordable than the Fit2. The KeyFit 30 is made to be easy to install, easy to adjust, and safe and comfortable for your growing baby. It may not be one of those all-in-one car seats some parents swear by, but it will definitely get the job done for the first few months of your baby’s life.

Just because the Chicco KeyFit 30 is the strongest option here, it doesn’t necessarily mean that the Chicco Fit2 isn’t worthy on its own. But when comparing both options, it’s hard to ignore some of the superior features of the KeyFit 30. If you are looking for affordability, safety, and comfort, then it is the perfect option for you and your baby. There is always the chance that it doesn’t quite work out for your little one, but in most cases, it is the perfect car seat for infants to get a snug and safe ride as soon as possible.

After spending 10 years as a nanny, Chrissy is now all about caring for her own kid and trying to find the time between potty training and sneaking vegetables in food to binge watch TV. She's also not above a good poop story, because all parents have them. 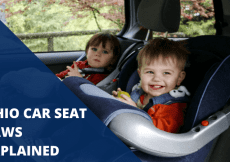 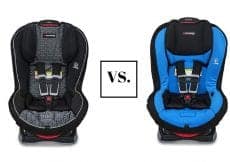