In this case, it would be the Britax Frontier vs. The Britax Pinnacle. They both offer plenty of convertible car seats and, since they’re both from Britax, a lot of the same qualities. But the truth is, they aren’t the same car seat.

The main differences between Britax Frontier vs Pinnacle are:

These differences are what will make it easier for you to choose between them. Take the Frontier, for example. You can’t ignore the benefit of safety precautions that it offers. On the other hand, the Pinnacle has similar safety features, including an extra layer of side impact protection.

They both share the easy ClickTight Installation System, which probably makes it that much more difficult to pick which one is best. And they both share similar adjustable headrest and recline positions.

But after you look at them both thoroughly, you might be able to see why one is better than the other. Neither is meant to be the only car seat you’ll ever need or work for your baby from infancy, but as a convertible seat to a toddler car seat, they both offer plenty.

The Britax Frontier Car Seat is all about safety. It’s made with the Britax SafeCell Impact Protection which essentially surrounds your little one with multiple layers of protection on each side. The headrest is lined with foam and has an energy-absorbing shell to take impact well and keep it away from your child’s head for the most part.

The car seat also has an impact energy-absorbing foam base to give you even more peace of mind. When it comes to comfort, the Frontier also performs well for your child. It has multiple recline positions to get your child is just the right spot for safety standards and comfort and there are nine different headrest positions to choose from as your child grows.

Although it can’t be used for babies and isn’t a rear-facing infant car seat, the Frontier does a transition from forward-facing car seat harness mode to forward-facing belt-positioning booster mode once your child is ready. And when you do transition to this convertible booster seat, it could very well be the last vehicle car seat you’ll need.

Why I Prefer the Britax Frontier | Amazon

This is a very safe car seat. There are MANY safe car seats. BUT, It's rated for up to 120 pounds. Most car seats with similar safety features don't come close. Better value because it lasts longer! No need to buy multiple car seats.

Buy at Amazon.com
We earn a commission if you click this link and make a purchase at no additional cost to you.
/p>

“I have to admit, I never understood why Britax car seats were so expensive. Well, I broke down and purchased one and now I know! I have had several brands of car seats and this is the only seat that has impressed me. Don’t get me wrong, the others were fine, I didn’t hate them, they just didn’t wow me. The instructions to install this seat are simply written and easy to follow. The seat itself is a dream to work with in comparison to others. All buckles, straps, etc. are easily accessible and simply adjusted.” – Kim Mills on Amazon.

“I absolutely love this car seat. So much so, I bought a second one for a spare to use for whoever needs to pick my son up if I’m not able. I bought a few cheap car seats and just didn’t feel it was installed properly. This car seat has spoiled my husband and I to the ease of use, and knowledge that out son is beyond safe in this seat. I couldn’t love this car seat any more if I tried. My son loves it, and that’s the most important thing.” – Katrina Berry-Johnson on Amazon.

“A great choice for the next step seat. My daughter was getting too big for the Britax seat she had been in since she left the baby carrier car seat. Her legs were just getting too long. This seat puts her at a much better angle and she can even get buckle herself. I expect to be using this seat until she is completely out of booster. I chose this seat because I didn’t want her in a booster seat with a regular seat belt.” – Megan Sebastian on Amazon.

The Britax Pinnacle isn’t totally unlike the Frontier, which is to be expected. They’re both convertible booster seats from the same manufacturer, so their drastic similarities aren’t very surprising.

The Pinnacle, however, is a few inches wider than the Frontier, which could make a big difference for some families, depending on the size of their car. On the other hand, however, the Pinnacle can be purchased on the manufacturer’s website while the Frontier cannot. It’s a small benefit, but it might help some parents more easily decide which car seat they’d prefer of the two.

Like the Frontier, the Pinnacle is made with the ClickTight Car Seat Installation System, making the installation simple and quick.

This is especially useful if you need to move the car seat between different cars. It also has side impact protection with extra plush cushions on the outside to help absorb impact in the event of a crash. When it comes to safety belt and ease of use, the Britax Pinnacle is easily a top option. 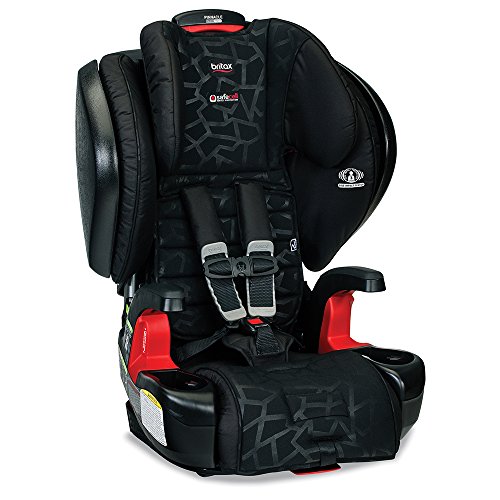 Britax Pinnacle ClickTight Harness-2-Booster Car Seat Check Price
We earn a commission if you click this link and make a purchase at no additional cost to you.
/p>

“have two little ones and I’m a bit of an overprotective mama. My kids are four and seven, both big enough to ride in boosters with the vehicle seat belts, but I’m not ready for them to ride that way. I love that this seat is big enough for them to sit comfortably in (we bought one for each kid) and still be in the 5-point harness. My son is on the bigger side and he hasn’t complained of being uncomfortable in it.” – Kristin Smith on Amazon.

“I love this car seat/booster! My son was so excited to go up a size in his car seat! I had the Britax Boulevard ClickTight previously and it was an amazing convertible car seat. It lasted a year and a half when I decided that I wanted something with more space. The Pinnacle is so comfortable for him and he will be able to get years of utilization out of it. I love the build in cup holders and all the extra padding.” – Dan Ash on Amazon.

“I was a little nervous about buying such an expensive booster seat, but I know my baby deserves the absolute best and this is one of those things. This booster is amazing!! To say the least. We went on a little road trip and my little girl fell asleep of course, and her head stayed nice and secure, it never once drooped or hung down like it used too. She loves it and I love that she is super safe and comfortable in it.” – Ashley Geronimo on Amazon.

Whenever you have two different car seats from the same brand, it’s harder to choose between them. The same goes for the Britax Frontier vs. the Britax Pinnacle. While both are convertible car seats that can last your child a long time, though, obviously one is going to be the stronger option of the two. In this case, the Britax Frontier is the better car seat.

It offers safety and is a little more affordable for your little one. It can also give you plenty of peace of mind thanks to its longevity. The Britax Pinnacle has similar safety features, which have value on its own to be sure, but the car seat still does not surpass the cost and overall quality of the Frontier. At the end of the day, it’s all about choosing the car seat that ticks off all of your must-haves for your little one, and the Frontier should do just that.

FAQ’s About Britax Frontier vs Pinnacle

When used as a booster seat, the Britax Pinnacle cannot recline. If you want it in this position, you have to pull the handle under the seat before installing the seat.

How long are the Britax Frontier and Pinnacle good for?

The Britax Frontier and Pinnacle car seats are ClickTight boosters and they have a life of 10 years in comparison to harness boosters which have a life span of 9 years.

Why are booster seats not latched?

Some booster seats do come with LATCH, however, most of them don’t because the Clicktight system is easier to install and secure. The reason why they don’t come with LATCH system is because vehicles already have them in at least two positions, so you can safely adjust the seat.

Choosing a car seat isn’t as simple as just picking out a random one from a random brand and calling it a day. In fact, it legitimately shouldn’t be that easy. When looking at every aspect of the Britax Frontier and Pinnacle, however, it’s a little easier to see which one might suit your family a little better.

As long as you take into consideration the good and the not so good that they both offer, it will likely be easy to see why the Britax Frontier is the stronger option between the two. And overall. You and your little one will not be disappointed.

Diono vs Britax Baby Brand - What Are The Main Differences? - The Baby Swag

[…] and Britax manufacture some excellent car seats and strollers. The question is, how do you know which brand is […]

[…] Britax Frontier vs Pinnacle Compared [Which is the Best Britax Car Seat?] […]

Britax Roundabout vs Britax Marathon Car Seat: Which is Best for Your Child? - The Baby Swag