There are enough car seats styles and designs out there to make your head spin. But if you decide you want to go with a convertible option to take your little one from the newborn stage through their first year and a little beyond, one of these Britax convertible car seats are the one for you. But what are the main differences between the Britax Emblem and Britax Allegiance?

Both car seats are similar enough to once again make the decision between which to buy quite difficult. However, if you look a little more closely, you can see one or two differences that might make the decision a little easier. You might get more confused before you can finally decide which is best for your family, but the goal here is to help you examine both car seats to decide which one is the better option overall.

On Amazon, you can find the Emblem for a price that might be a little more affordable than the Allegiance, so if the cost is your main deciding factor, that should help you determine which is the stronger option right there. Both car seats, however, are designed for children from 5-65 pounds and transition from rear to forward-facing when the time comes. 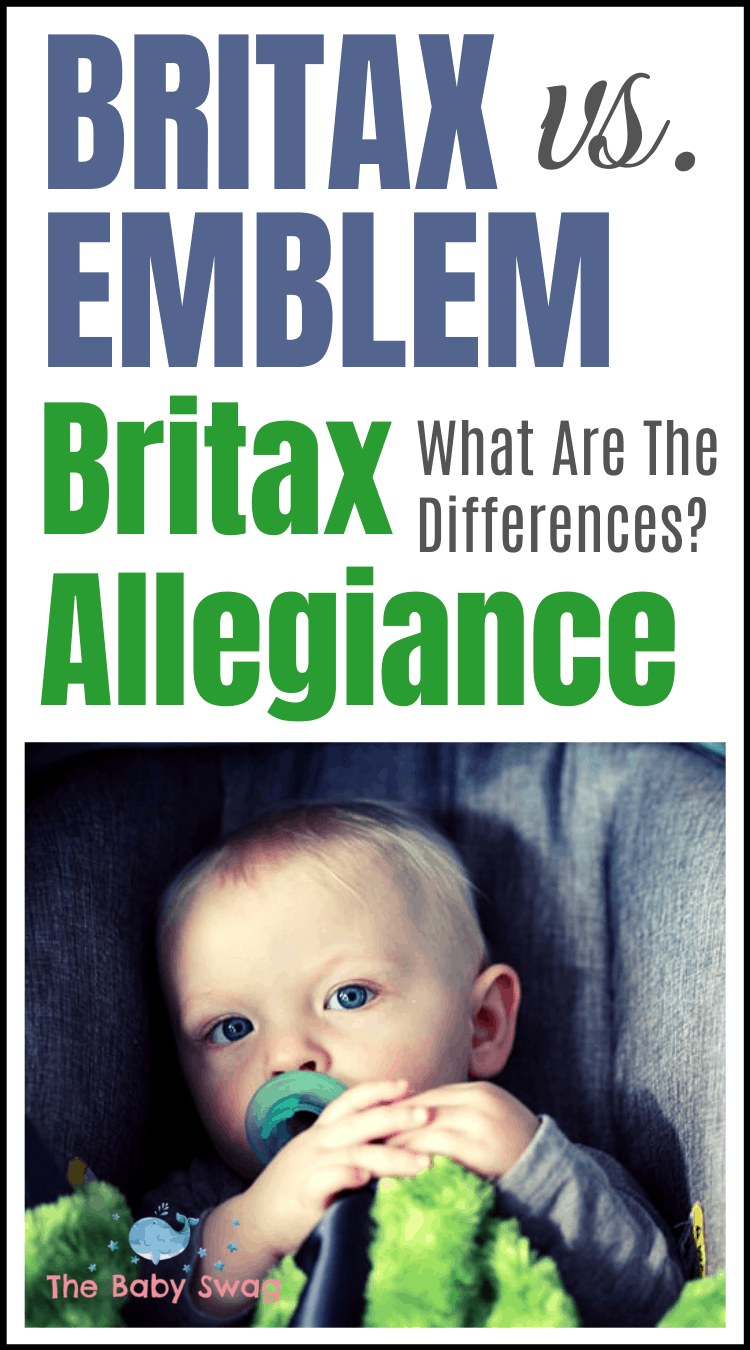 They are both designed with steel-reinforced frames to keep your baby secure and safe and have foam-lined shells. The Emblem, though, also has a quick-adjust head protection to add to the overall safety and once again, the Emblem proves that it might offer a better value.

Even though the Allegiance doesn’t offer the same quick-adjust headrest, it does have thicker padding on the headrest, which adds safety in its own way. As with any Britax car seat, both of these are designed to keep your baby happy, comfortable, and safe for a long time. Either one of them would be a fine option for your newborn to get started on the right track. But you’re here because you already know that.

The idea is to help you figure out which of these car seats is better and what the differences between the Britax Emblem and Britax Allegiance are. Before you are ready to run out and spend some serious money on a long-lasting convertible car seat, let’s look at both of these car seats as closely as possible. 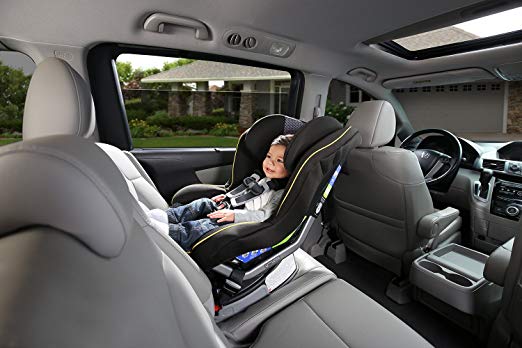 The Main Differences Between the Britax Emblem and Britax Allegiance are: 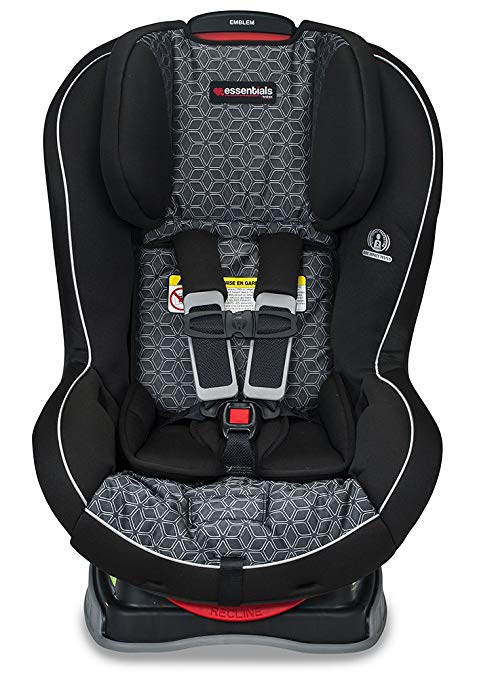 Safety is the top priority with the Britax Emblem Convertible Car Seat, but with Britax car seats in general, that’s real ng new. It is designed with SafeCell Impact Protection, which features two layers of side impact protection and extra protection around the head to support and keep your child’s head and neck safe in the event of a crash.

The padding associated with the safety also adds to your child’s overall comfort, though, which is an added bonus for an already fully equipped car seat. It also has a three position recline and 10 position headrest to keep your child at the right angle and to give him or her support as they grow. One of the biggest issues parents see with car seats is the slumped head syndrome. Or, your kid’s head slumping forward or to the side as they sleep in their car seat.

With a headrest that can adjust to so many different positions, they can get the support they need as they grow. The Emblem also has a removable but totally plush body pillow that allows newborns to fit snugly and safely in the car seat. But since they will likely grow out of needing that quite fast, it’s as easy to remove as it is to attach to the seat.

Having a way to keep the buckles out of the way when you do this can make a huge difference to parents who have had to deal with twisted straps and buckles getting in the way. Overall, the Britax Emblem has your kid covered for safety and comfort and keeps you in mind for ease of use and longevity.

“Parents hate car seats – because they’re a pain. Obviously, we like the protection, but the process is usually frustrating at the least. This car seat doesn’t make that perfect, but it helps a lot. I found this seat to be easier to use than others I’ve tried, it was comfortable for the three kids who have used it, everything is super secure and feels safe… and it doesn’t look too horrible.” – J. Salzenstein on Amazon.

“Very easy to install in my car and to move between our two cars. Holds the kid securely. We haven’t exactly crashed the car to see how well the safety features work, but there’s no reason to assume that they don’t. Britax knows how to design car seats!” – W.B. Halper on Amazon.

“I was ecstatic to see Britax had released this line, these seats are light, so easy to install, comfortable. I wasn’t going to get the cheapest seats I could find bc of it being a long drive. I actually like these better than the boulevards. They are super easy to wash (disassemble/reassemble).” – Gina L. on Amazon.

“Very good baby seat with lots of comfortable padding. As stated in the description: “Two layers of side impact protection mean your child’s head and neck are secure in the event of a crash.” The 10-position harness adjusts to as the child grows which is an added plus. Easy to lock into place with seat belts. It’s expensive, but has a lot of safety features. If it had been a bit more affordable price, I would have given five stars. Otherwise, excellent.” – Catherine Todd on Amazon. 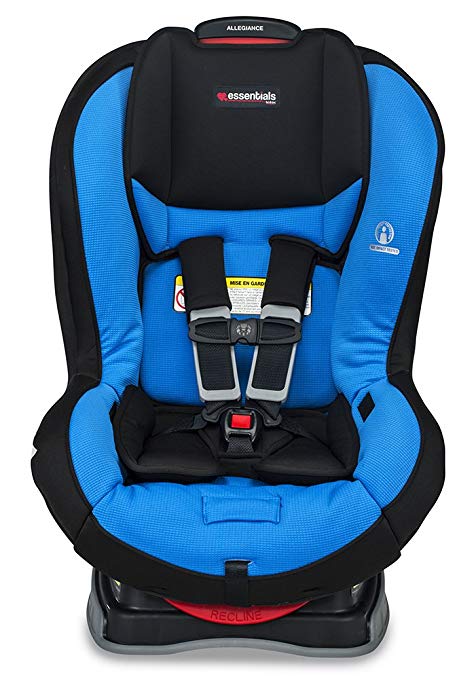 The Britax Allegiance Convertible Car Seat is so similar to the Emblem that just by looking at them side by side, it would probably be quite difficult to tell them apart.

When you look a little bit closer, however, you will see that while the Allegiance does have safety features, it is missing the Emblem’s quick-adjust head protection. Still, there are plenty of safety features in place to keep your child secure and safe in the Allegiance.

It is designed with a steel-integrated frame and foam-lined shell with the Britax side impact protection. It also has the SafeCell Impact Protection to provide advanced protection to your little one whether they are at the newborn stage or have grown and moved on to the forward-facing position. As with most Britax car seats, the goal with the Allegiance is to provide tons of safety and comfort for as long as possible.

For your own convenience, the Allegiance has a totally removable cover that can be machine washed any time. If you have a baby who is prone to spilling their bottle or sippy cup all of the place or you have crackers smashed into the fabric, being able to remove the cover to wash it can be so important. And like the Emblem, the Allegiance has the same easy buckle system to make it a little easier to get your baby in and out of the car seat.

You aren’t guaranteed to have the easiest time carefully removing your newborn from the car seat each time, but the car seat has some things in place to make it a tad less stressful. Plus, you can remove the plush infant pillow insert once your child has grown out of that stage. But the beauty of this car seat, in general, is that it can grow with your child for quite a while and that’s the goal for many parents when it comes to car seats.

“These have much higher sides than I anticipated! The seat material and butt cushion seems very squishy. I love that the straps have plastic liners so they can’t get tangled or messed up. We are happy with our purchase.” – Jarrett Richie on Amazon.

“This brand is the Land Rover of car seats for babies and toddlers. It is well-designed and smart looking. Easy in and out for infants and children. Easy to take apart and clean. My daughter did her due diligence in researching the safest car seats and chose this brand. This car seat was bought for a grandparents vehicle. We ordered a couple more of this one for my grandchildren’s sitter and aunt’s vehicle too. If you want the safest and best designed car seat for your babies and toddlers buy Britax.” – Ellen O’Dell on Amazon.

“I love this car seat. It shipped quickly, which was very good as I needed a car seat ASAP. The instructions in the manual were clear and concise. It was super easy for me to install via seat belt in the middle seat… I have tried many car seats and none have securely installed in the middle before, so that is a definite plus for me. The seat isn’t so heavy that I won’t be able to switch it to my stepmom’s car when she babysits, and the easy install makes it a quick transition on those days. My son seems comfortable in the seat and doesn’t fuss nearly as much as he did in his infant seat from another brand.” – Jessica Joyner on Amazon.

“This is a great transition seat, when my daughter outgrew her infant seat, but wasn’t ready for a large child seat. We’ve started rear facing, and will stay rear facing as long as she’ll fit that way. Once her legs are too long to sit rear-facing, we’ll turn it around. Adjustments are easy, installation is not complicated. It isn’t too heavy, either.” – B. Pierce on Amazon. 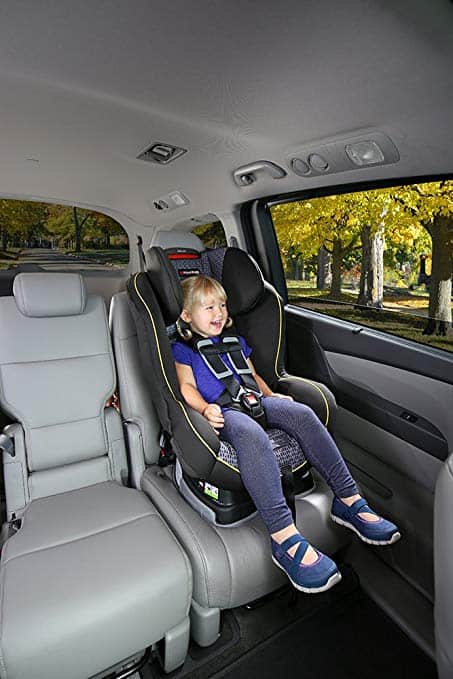 As you can see, the car seats are virtually identical in both design and benefits. There are so few differences that, in a way, you would be doing yourself a favor regardless of which one you choose to purchase. But at the end of the day, the Britax Emblem Car Seat is the stronger option. It has some added safety for your child’s protection and it is a little more affordable than the Allegiance.

Yes, the Allegiance can be purchased on the Britax website, right from the source, and it shares the same size, weight limit, and SafeCell technology as the Emblem. They both also share the multiple recline positions, removable and washable cover, and infant insert. There is no denying that these two car seats are quite similar. But because of the few differences that are easy to see once you know about them, the Britax Emblem is the one to go with here.

Britax car seats are clearly a force to be reckoned with. The brand is home to so many different car seats, some convertible and some not, that can make parenting just a little bit easier. Most of them are made with the same safety technology for your child’s safety but also their comfort. And you definitely can’t deny that the Emblem and Allegiance both share these safety features to give you optimum peace of mind.

When it all comes down to it in this instance, the Britax Emblem is the better car seat overall, but that doesn’t mean the Allegiance is bad by any means. It is another Britax convertible that stands out above so many others. It just so happens that in this case, the Emblem outshines the Allegiance. If you want the same longevity and comfort but a better-looking price and a little more safety, then the Britax Emblem is the one to go with.