Some parents swear by co-sleeping or at least having their baby in the same room as them for the first few months of their baby’s life. Other parents, though, prefer to keep their baby in the nursery from day one. There’s no one way to go or the “right” option, but when parents feel the need to have their babies close choosing the best bedside bassinet comes into play.

Whether the goal is practicality, something with more bells and whistles, or a bassinet that’s the most economically sound, this list of the top five bedside bassinets has parents’ needs covered.

Even if some parents’ goals are to have a bedside bassinet available on the off chance that their baby is sick and they need to keep him or her close, it’s always convenient to have one at the ready. And these top five bedside bassinets are designed to meet most parents’ concerns.

One of the biggest strengths that come from the Graco Dream Suite Bassinet is that being Graco, it comes from a brand that’s already known and trusted by most parents. But the bassinet also doubles as a changing table and comes equipped with a vibration option, meaning no absent-minded rocking by hand in the middle of the night and no super fat rocking speed all on its own.

And since the Dream Suite Bassinet is also flipped around to be used as a changing table, it makes those middle of the night diaper changes much easier and enables parents to stay in their own bedroom as they care for their newborn rather than navigate their home late at night. 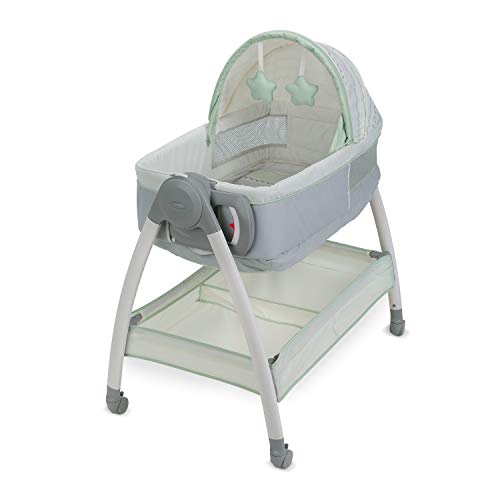 Graco Dream Suite Bassinet
$189.99
Check Price
We earn a commission if you click this link and make a purchase at no additional cost to you.

2. SwaddleMe Bassinet – The By Your Bed Sleeper

Summer Infant’s SwaddleMe By Your Bed Sleeper is another bedside bassinet that comes from a trusted brand by most parents. It’s also a typically affordable brand, which is another deciding factor most parents look to. The bassinet has an adjustable incline made to made the baby, while swaddled in a blanket or not, feel that same comfort that comes along with being swaddled.

It also has a vibration, music, nature sounds, and a side rocking rhythm that makes it easier for parents to rock the bassinet without even getting out of bed. The legs of the bassinet have the ability to tuck underneath the bed too, making it possible for parents to sleep with their baby right by their side, which for some, is the whole point of a bassinet in their bedroom. 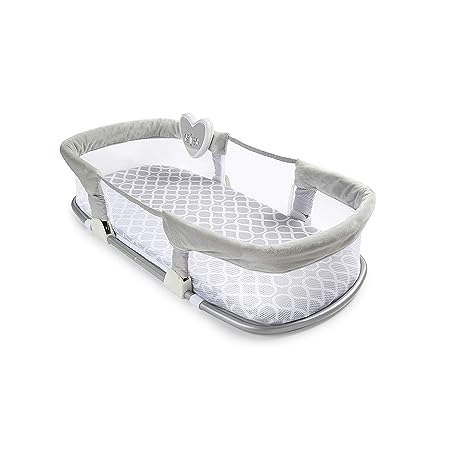 SwaddleMe by Your Side Sleeper Check Price
We earn a commission if you click this link and make a purchase at no additional cost to you.

While the Serena & Lily Sausalito Moses Basket might be on the high end for some parents, others might consider it their own item to splurge on when it comes to the infancy stages of their baby’s life.

The basket is designed to be a snug and comfortable space for infants to rest while remaining close to their parents, but when that stage is over, it doubles as a toy bin. While it doesn’t offer the option of tripling as a changing table too, the Moses basket does offer closeness and the ability to bind, while taking up very little space.

At first glance, the UPPABaby Bassinet seems like it’s made for strictly on-the-go use, but the fact of the matter is that it’s designed to be used for any time parents need their baby to be in it. I.e., as a carrier, while out and about, for a bit of rest time, or yes, overnight use.

With the stand (sold separately), it can be placed next to the bed or even as a co-sleeper for parents, making it even more versatile than it already is. It also makes it possible to go from being out for the day to coming home without needing to wake the baby to move him or her to a crib before they really need to. 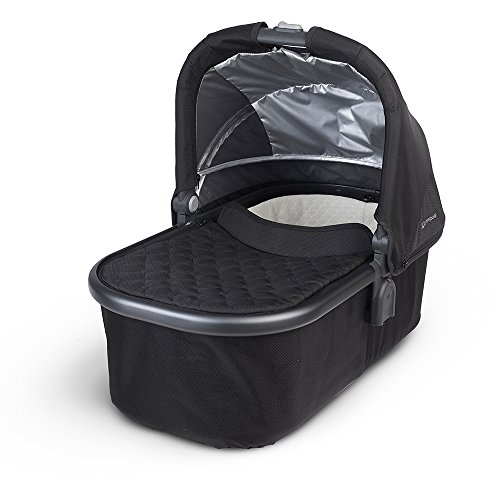 This universal bassinet complies with new ASTM standards requiring, (1) the bassinet to be at least 191 mm in depth and (2) canopy hinges be engaged by pressing a button to both raise and lower the canopy.

It’s kind of hard to ignore the fact that the Babyletto Bowery Bassinet looks like a smaller version of an infant’s crib, which for some parents can be a good thing. It could make the transition to crib easier down the line and the straight, simple edges also make the bassinet appealing and able to fit in with most other furniture in a room.

And since the pad and base are flat, parents can use the bassinet as a changing table if they need to. While being an attractive bassinet certainly isn’t grounds for being a deciding factor, it’s one of the characteristics that set the bassinet apart from some others.

As with any big decision regarding baby products, ultimately, the decision is all up to the parent involved and it’s up to them to decide what they think is best for their baby. Obviously, safety is the number one thing, though versatility and price aren’t far behind. We believe the Babyletto, UPPABaby, Serena & Lily, Graco Dream, and SwaddleMe bassinets are all excellent choices for your family.

There are certainly some bedside bassinets that would be better off left as strictly changing tables or could do with a few minor adjustments, but the ones on this top five list of the best bedside bassinets all have their strengths.

Choosing the best baby bassinet isn’t easy, but it’s not supposed to be since it’s a pretty big accessory for any baby. But it also shouldn’t be stressful for parents to choose either, which is why one of these are sure to cover most of the bases for parents’ must-haves regarding their bedside bassinets.

[…] you’re looking for a gender-neutral bassinet, crib, activity gyms, or any other useful furnishings and decorative fittings for your nursery, our […]

The Swaddleme bassinet has been safety recalled.

Like!! I blog quite often and I genuinely thank you for your information. The article has truly peaked my interest.

UPPAbaby Cruz vs Vista [Feb 2020]: What is the Difference? - The Baby Swag

Looking for a co-sleeper bedside bassinet? This could be your best bet, though it's somewhat hard to find. Sharing a bed with a newborn is such a beautifully intimate experience for mom and a newborn baby. But due to SIDS and suffocation risk, many pediatricians do not recommend it. Instead, some bassinets are specifically designed to make co-sleeping safer by putting the baby right up next to mom, but in its own little bassinet. The HALO (#1, above) is a great example of that, but quite a bit more expensive than this unit. Co-sleeper bassinets are generally more expensive than traditional bassinets, but moms love them especially if they have undergone a C-section and need to restrict their movement. This is basically a no-frills co-sleeper bassinet with some great basic features. It has a lot of mesh walls on the sides to help breathability, a thin and firm mattress (like it's supposed to), and we found it very easy to raise and lower the co-sleeper side. Basically, when you want to feed you can push down the side to access your baby, and pull it back up when you're finished. There are adjustable legs to fit shorter or taller beds, and a great strap you can put under your mattress to hold it close (you can also lock the wheels). Having the bassinet right up against the side of your bed can give some comfort and security that will help lull your baby to sleep. There's also a nice storage basket on the bottom. Overall, this is an excellent no-frills bedside bassinet with a co-sleeper option that works quite well. It's a bit on the higher end in terms of price, we found it for about $180, but once in a while, it's out of stock and difficult to find.